Join Me at My New Blog 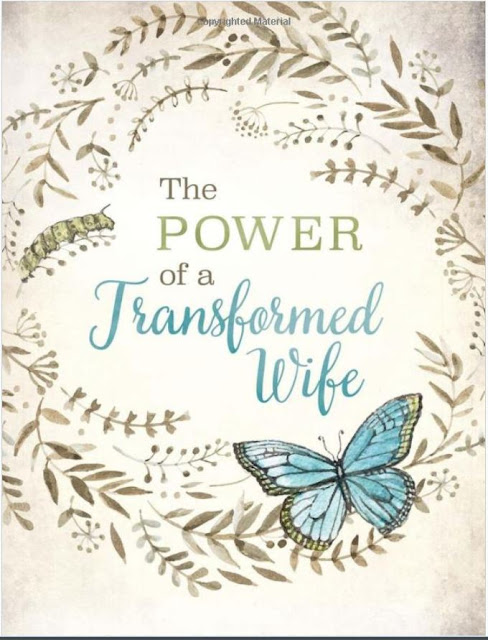 I have been writing here at Always Learning since the beginning of 2011 and have decided it was time for a face lift. Come join me at my new blog The Transformed Wife!

This blog will remain here and the over 2100 posts that I have written. As you can see from my sidebar, my book can be bought on Amazon.

To every thing there is a season,
and a time to every purpose under the heaven.
Ecclesiastes 3:1 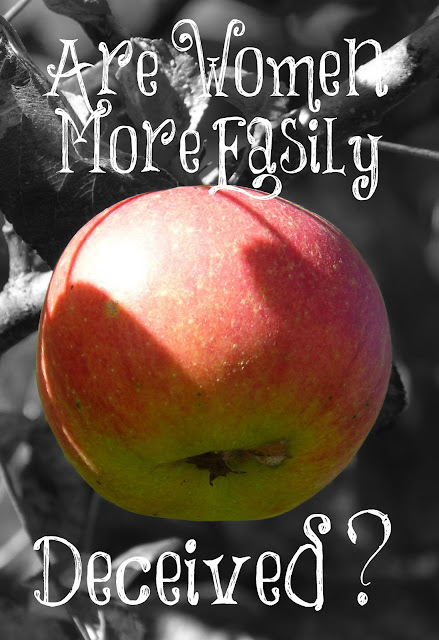 Women don't like to hear that they are more easily deceived. In fact, they argue with me that this could not be true. "It was only Eve who was deceived and it certainly doesn't mean we all can be," they tell me. Here are is the verse about women being deceived.

"But I do not allow a woman to teach or exercise authority over a man, but to remain quiet" (1 Timothy 2:12).  The reasons the Apostle Paul gives that women aren’t to teach or be in authority over men are from the following verses. "For it was Adam who was first created, and then Eve. And it was not Adam who was deceived, but the woman being deceived, fell into transgression" (1 Timothy 2:13, 14).

Then women tell me that this doesn't prove that women are more easily deceived since this verse is only speaking about Eve. Are they saying the sinless and perfect Eve who walked in the Garden with the Lord but then was deceived by Satan was not as good as them and if they were in the same situation and a serpent tried to convince them that they should eat the forbidden fruit they would would have quickly responded, “No way, Satan, you can’t deceive me since God said I wasn’t to eat that fruit. You aren't going to deceive me!” Oh yes, they mistakenly believe, they would have responded to Satan much differently than Eve and would have not dashed all of civilizations ever to exist into decay and death.

Do these women make a good point? No. They are wrong and women are more easily deceived than men. Haven’t they ever heard of the car salesmen jokes about the salesmen hoping to sell to women rather than men since they can sell women the cars for a much higher price. I would never buy a car without Ken by my side since I know I would be much easier deceived than Ken would be. (Do you know why all the sales call are in the middle of the day? So they can talk to women and deceive them into buying their products.)

I love what Debi Pearl wrote about the nature of men and women. “God designed the woman to be sensitive and vulnerable for the sake of the little ones whom she must nurture. The soul of a mother had to be vulnerable, the outer shell thin. She must be quick to feel, to hurt, to love, to have compassion, to take in the broken, and to believe the best. Vulnerability is a woman’s greatest natural asset and the point of her greatest weakness.

A woman can become tough and hard, skeptical, and cautious in relationships just like a man. She can become guarded and cynical, but in so doing, she is no longer feminine, no longer attractive to a man, and she will even begin to not like herself. Unprotected by the covering of her husband, she will grow miserable fighting her own battles and trying to survive on an equal footing with men.

Just look at the faces and mannerisms of outspoken feminists. In their attempt to shed their vulnerability and express their independence, feminists begin to exhibit traits and behaviors completely outside of their created feminine nature. They lose their beauty and charm.” (Created to Be His Help Meet on page 108)

The reason we need to understand this, women, is so we won't be led astray easily and have make sure we follow our husband's lead and ask him when we have a question. Search scripture for answers and allow it to lead you into Truth.

Trust in the LORD with all thine heart; and lean not unto thine own understanding. In all thy ways acknowledge Him and He shall direct thy paths.
Proverbs 3:5, 6
Posted by Always Learning at 6:00 AM
Are Women More Easily Deceived?
2016-10-03T06:00:00-07:00
Always Learning
Marriage|
Comments

Email ThisBlogThis!Share to TwitterShare to FacebookShare to Pinterest
Labels: Marriage

Downright Cruel to Have a Baby Sleep Alone?

The Los Angeles Times has an article called It's Okay to sleep next to your infant child. In fact, it's beneficial. They wrote that sleeping with an infant is common in other cultures, therefore it is probably the best way to do it.

The American Academy of Pediatrics advises against parent-child co-sleeping, or “bed-sharing,” citing safety concerns from accidental suffocation or falls. Doctors worry that tired — or intoxicated — parents will roll onto their infants in the middle of the night without realizing it. Putting babies in cribs or cots in a separate room is also customary in Britain, Germany and other parts of Western Europe.

Much of the rest of the world believes it is “downright cruel to have a baby sleep alone.” There is so much contrary information out there; what is a mother supposed to do? Speak to your husband about it and see what he would prefer. This is the most important thing to do.

I don’t believe there is a right or wrong way in deciding how to do this, unless a mother is an alcoholic, drug addict, or heavy sleeper. I would accidentally sleep with my babies when they were infants while I was nursing and we would both fall asleep but most of the time, I would put them in their bed right by my bed up until six weeks old. Ken and I are such light sleepers that all of their little squeaks and noises would keep us awake. There was no way we could sleep with them in the same room for long. A mother and father getting no sleep or little sleep is not a good thing.

Also, it doesn’t matter what the rest of the world thinks or does. There are many women I know who always slept with their infants and raised great children. There are many women, like me, who didn’t sleep with their children and raised great children. This should never be a cause for conflict among mothers. They should do what their husbands want and feel comfortable with.

We made our infants sleep through the night by six weeks. I was too exhausted to be woken up all throughout the night. It was better for both of us when we had a good night sleep. A baby doesn’t know how to put themselves to sleep so every time they wake up, they cry. Allowing them to cry the first time they wake until they go to sleep will teach them that they can go to sleep without their mama. This didn’t harm my children at all.

Other mothers could never dream of allowing their babies to “cry it out” so they shouldn’t if they don’t want to as long as they aren't getting emotionally and physically distraught for lack of sleep. Then they need to allow their babies to cry so they can get to sleep. An terribly exhausted mother is not good for anyone. However, this is no cause for conflict either. It’s a non-issue in my mind. You’re not a better mom for whatever way you chose.

You’re a good mother if you raise your children in the nurture and the admonition of the Lord. Period. This is what is important to the Lord so it should be what is most important to us.

Shine the Light of the Gospel on Halloween!!!