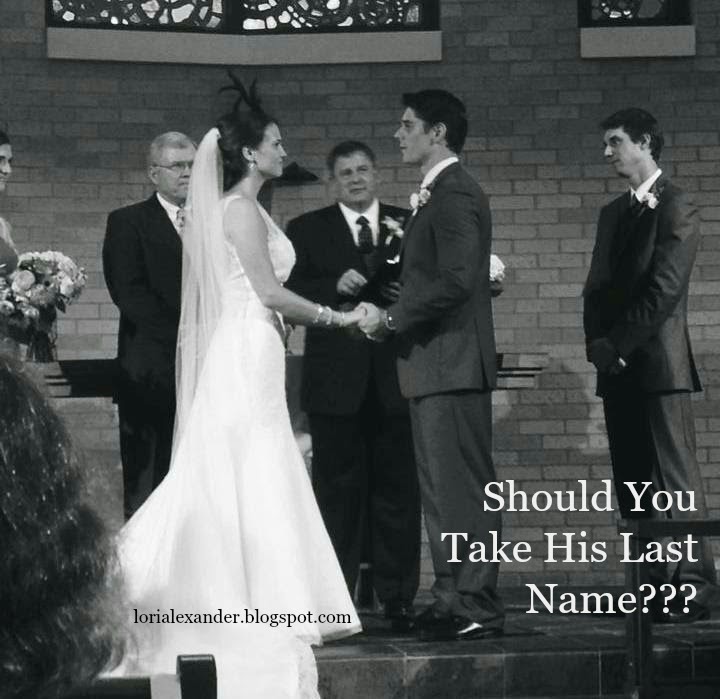 Emily took Steven's last name last week. Her father walked her down the isle towards Steven. He stood between Emily and Steven. Her father has been her protection from the time she was born. He loved her, provided for her, and protected her. Steven went to her father awhile ago and asked her father for her hand in marriage.

Emily took her father's name when she was born since her father was her protector. When the three of them stood before the pastor, he asked Steven if he would protect, care for, and love Emily until one of them should die. Steven made a vow that he indeed would do all those things for her.

Then the pastor asked Emily's father who was giving this woman to this man. He responded, "Her mother and I." A transfer of protection happened in that moment. Steven and Emily joined hands. When they were announced as husband and wife, the pastor said, "May I introduce to you Dr. and Mrs. Steven Alexander." Emily had taken Steven's name now that he had vowed to take over protection of Emily from her father.

When we marry, we become one with our husband. He becomes our source of protection and provision and we become his help meet. It is such a beautiful picture of Christ and His church. When we believe in Jesus, we begin calling ourselves Christians. We take on a new name with a new identity in the same way that Emily now has a new name and a new identity.  She is Steven's help meet with his last name.

All of the young women in my family, my daughters and daughters-in-law, changed their names on their Facebook pages almost immediately after they got married. They were thrilled to take on their husbands' last names. They wanted to be clearly identified with them. It was something they were proud and very happy about, unlike many in our "enlightened" society.

For this cause shall a man leave his father and mother,
and shall be joined unto his wife, and they two shall be one flesh.
Ephesians 5:31

***HERE is a short video of their wedding!