A Career Just In Case? 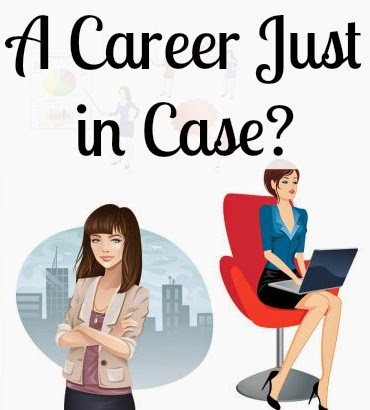 Many young women are told to get an education and a career in case their husband dies so they will have a way to support themselves.  This is not biblical.  No where in Scripture does it tell young women to have careers and leave their families for hours every day.

Paul's instructions to Timothy in I Timothy 5 gives us clues as to how widows are to support themselves.  To widows under 60 years old he commands, "I will therefore that the younger women marry, bear children, guide the house, give none occasion to the adversary to speak reproachfully."

To the older widow, he commands, "Let a widow be put on the list {to get support from family or the church}...having been the wife of one man, having a reputation for good works; and if she has brought up children  if she has shown hospitality to strangers, if she has washed the saints' feet, if she has assisted those in distress, and if she has devoted herself to every good work."

He begins chapter 5 by saying, "If any widow has children or nephews, let them learn first to show piety at home and to requite their parents: for that is good and acceptable before God...But if any provide not for his own, and especially for those of his own house, he hath denied the faith, and is worse than an infidel."

He concludes his discussion about widows with, "If any man or woman that believes have widows, let them relieve them, and let not the church be charged; that it may relieve them that are widows indeed."

He tells them this because young widows are prone to "be idle, as they go around from house to house; and not merely idle, but also gossips and busybodies, talking about things not proper to mention."