Biblical Submission Is So Misunderstood 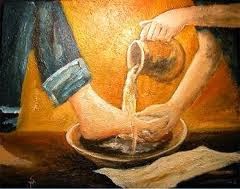 The concept of Biblical submission as it relates to marriage is very misunderstood in the church and outside of it. God’s truths are often far more complex than what they appear on the surface, as are many Biblical ideals. Most of the ideals for a Christian marriage can be summed up as simply "being Christian" to each other by trying to serve and please one another.

“I want to show the Jesus living in me to you in the way I love, serve and please you.”

The Bible, and the godly principles taught therein, is our operating system, and God's Word should be first and foremost on the minds of both husband and wife. To please each other goes beyond a 50% marriage and instead seeks the best interest and desires of your spouse before your own interest and desires. Is this not what Christ showed all Christians to do; to give up our lives in love and service towards one another?

There should be nothing equal about my serving my spouse, but instead I should seek to out-produce him/her in almost every area of the marriage. Certainly we can have roles with husband working a job outside the home and the wife working within the home, but if either spouse needs help, even when it is not requested, we are to jump in and “do unto others” with selfless service and sacrifice.

Now you say, “This sounds great! But then why are so many Christian marriages failing if both spouses are trying to please each other?” The answer is simply that too many marriages are not living up to even a modest set of Biblical ideals. Many Christians are not acting like a Christian to their spouse because they selfishly want their share, their half, their ways.

What makes a Biblical marriage unique is not really submission, but the the order of things ~ "For the husband as head of the wife as Christ is head of the church" {Ephesians 5:23}.

To go from a good Christian marriage to a strong Biblical marriage one must willingly move beyond mutual submission to understand how God prizes order in relationships. God assigns the husband's role to be leader not because he is smarter, wiser, stronger, but because God wants order. A relationship without a "head" is prone to potentially endless arguing, perhaps not in all marriages, but many. But beyond this a husband as head is to love his wife sacrificially, even when she does not follow.

"This headship, then, is most fully embodied not in the husband we should all wish to be but in him whose marriage is most like a crucifixion; whose wife receives most and gives least, is most unworthy of him, is - in her own mere nature - least lovable. For the Church has not beauty but what the Bride-groom gives her; he does not find, but makes her, lovely. The chrism of this terrible coronation is to be seen not in the joys of any man's marriage but in its sorrows, in the sickness and sufferings of a good wife or the faults of a bad one, in his unwearying {never paraded} care or his inexhaustible forgiveness: forgiveness, not acquiescence. As Christ sees in the flawed, proud, fanatical or lukewarm Church on earth that Bride who will one day be without spot or wrinkle, and labours to produce the latter, so the husband whose headship is Christ-like {and he is allowed no other sort} never despairs.”
The concept of “mutual submission” as perceived and believed by many in the church is an oxymoron because one cannot both be “subject to” and be the "head" or leader. One cannot lead and yet “submit in everything.”  Christ could not be both head of his church and submit to his church, and elders do not mutually submit to members.

The concept of an "egalitarian marriage" often has both spouses looking for equality, as an “equal marriage” often means I am looking for my half, my rights, my needs to be met my way? Christ made it clear that all are to be treated with equal personhood, but our role is to serve and put others before our own selves.

It is the "Biblical marriage" where the husband is the sacrificial leader and the wife is submissive and respectful of his position as the head of the family. When things go wrong, or become difficult, the godly spouse gives more, loves more and plays an even greater God given role to be "like Christ" to try and win over their difficult spouse .

If you want a great marriage, move beyond egalitarianism to a Biblical marriage of pleasing and serving one another fully without waiting for your spouse to respond in like manner. Allow your spouse to play their role in God's order.  Beyond this, trust that the Holy Spirit is doing His work to bring you both into "One Flesh," just as Christ and His Church are One, and God the Father and Son are One. At the center of the Biblical One Flesh marriage is not principles, actions or deeds, but Christ Himself.

Can you see Jesus in your marriage?
If not, will you be the one who puts Him there no matter what?

Do nothing from selfish ambition or conceit, but in humility count others more significant than yourselves. Let each of you look not only to his own interests, but also to the interests of others. Have this mind among yourselves, which is yours in Christ Jesus ... who humbled himself by becoming obedient to the point of death, even death on a cross.Therefore God has highly exalted him and bestowed on him the name that is above every name.
Philippians 2:3-9