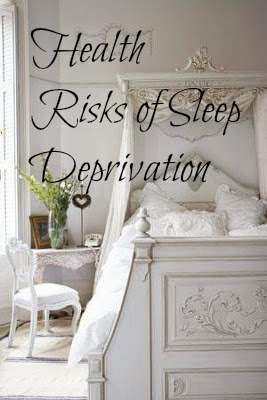 Did you know that a lack of sleep can lead to all kinds of health problems. Dr. Archibald Hart spoke about this very topic at a marriage retreat recently. He was the same one who gave me a lot of the information I used in my post about Teenage Depression.

After the Twin Towers collapsed, he went to NYC and spoke to the ones in charge of the firemen who were working in the rubble. He told them to get those men out of there after two weeks or they could risk their mental and physical health.

When you are under stress,  your body pumps out cortisol to handle the stress. Long-term high cortisol levels can lead to a host of physical problems such as lowered immune system, blood sugar imbalances, high blood pressure, decreased bone density, and obesity. This  then leads to depression and all kinds of other mental illnesses.

Ken just spent two and a half weeks in Europe. When he was there, he ran on adrenaline.  When he came home, he was exhausted and it lasted for weeks. More than two weeks is too long to be running on adrenaline without enough rest.

Dr. Archibald said the cure for adrenal exhaustion is sleep, a lot of sleep. He recommends at least eight hours of sleep a night. You need to sleep in a dark, quiet bedroom. Dr. Marshall teaches that you need to have at least five hours of uninterrupted sleep without raising your head off of the pillow above your chest for your adrenals to be recharged.

Stress and lack of sleep hampers your immune system to fight disease. You become very vulnerable to colds and flu when your body is not well rested. You need to build up a healthy immune system because this is what will give you good health.

This is a good reason to have your babies sleeping through the night as soon as possible for the mom's and baby's sake. It is a good reason to not drink too much water before bedtime or watch news. Encourage your teenagers to sleep a lot. Let them know of the risks if they don't. Depression and illness is no picnic.

Look at Jesus.  He never hurried to and fro.  He took time to rest and pray.

It is vain for you to rise up early, to sit up late, t
o eat the bread of sorrows: for so he gives his beloved sleep.
Psalm 127:2