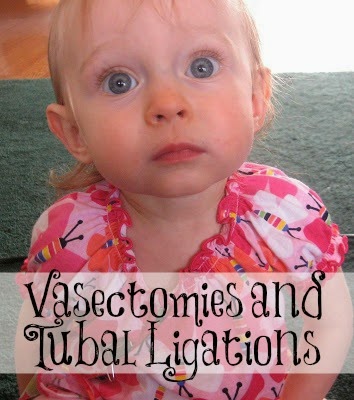 Opinions on these procedures are many and varied. What I am going to write about on this topic is only my opinion. I could spend a lot of hours studying all the side effects, but I am not going to do that. I am only going to give you what I believe through common sense and knowledge of God's Word.

Both procedures stop a normal bodily function. I know many men have had vasectomies and are fine. However, it just doesn't seem healthy to me.  here does all that sperm go? It is just like the birth control pill stopping periods.

I have been reading through these articles written by a woman who had ten children. She and her husband decided early in life to completely allow God to plan their children. They had very little money. They believed God when He said He was their provider. Her husband has always worked hard. She stayed home full-time right after they were married.

The children are all between two and a half and three years apart using no birth control.  They were consistent in disciplining them and teaching them the ways of the Lord. No, it wasn't always easy but she realized her life was about being a living sacrifice for the Lord.  Her rewards have been amazing.

I have heard of these kind of stories over and over again. When you truly trust God, He provides abundantly for you. Mothers decide to stay home and be full time wives and mothers, then the husbands' income increases.

I hear a lot of "but what about..." out there. Instead, you should be saying "but God..."  I am not saying you need to let God be in control of how many children you should have or you will be sinning. It is an issue that needs to be decided between you and your husband.

I am just writing this because I feel like I was lied to when I was younger. I believed the lies of society and the church. I believed we should only have x amount of children so we could give them everything they needed.

I trust God much more now. I like Him being in control and not worrying about the future. I LOVE the blessing and gifts of children. Pray carefully before doing anything to cut off your ability to have children permanently. That is all I am asking you to do.

Lo, children are a heritage of the LORD
and the fruit of the womb is his reward.
Psalm 127:3