Obedient to Their Own Husbands ~ Chapter Twenty Two 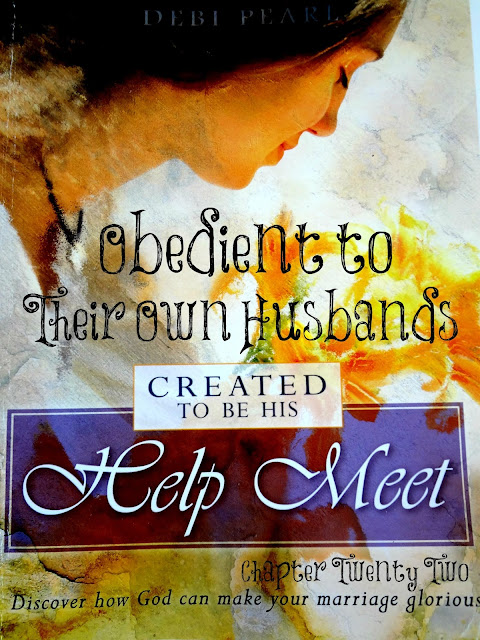 My favorite story in the entire book is in this chapter. It is about the young, pretty woman married to a stinky, mean man who never treated her kindly until he, without notice, brought home his co-workers for breakfast and she treated him as a king. She was a crown to her husband and eventually won him to the Lord by her obedience to him.

Unlike this young woman, most women spend their whole married lives in conflict with their husbands, trying to change them. It is a battle of the wills that no woman has ever rightly won, for even if she gets his compliance, she loses his heart, and he loses his self-respect...A woman's greatest power is in obeying God through obeying and honoring her husband. When she departs from God's order, she is setting herself up to create a life of turmoil, bitterness, and defeat for both of them.*

Debi also tells a story of a man who was a "dope-head criminal who made his living dealing heroin." When he was locked away, his wife divorced him and  married another man in her church who had divorced his wife, since he was unhappily married. Everyone thought that this was just great. Debi disagreed. What if this young wife visited her husband in prison and shared the Gospel with him and even took her children to see their daddy. "Who knows how many men in that prison would have heard the old, old story of how a Savior came from glory just to save them from their sins, all because one little lady was willing to live her life for Jesus by honoring and reverencing the man who was her husband?"* Think of what an example she would have set to all those around her, especially her children, of God's unfailing and unconditional love for us. She would have had an eternal vision for her husband's soul, instead of the shortsightedness she had in divorcing him for her own "happiness," as if this is what our short lives here on earth is about.

Debi brings up three issues in this chapter that concerns obedience to one's husband. What if you are remarried? Be a godly, submissive wife to him! What about birth control? Debi wrote, "We have noticed that big families are more likely to produce children who are emotionally stable and less self-centered, with a better-than-average probability of growing up to be a dependable, balanced adult." However, a woman stands before God for her willingness to honor her husband; a man's place is one of much greater gravity. He will stand before God for the way he has led his family and the decisions he has made.* Therefore, obey your husband in this area and give it to the Lord in prayer. Lastly is the question concerning head covering. Your husband is your head so if he wants you to cover your head, cover it. If he doesn't, don't.

“Wherefore she has respect to all his commands, and esteems all his precepts concerning all things to be right; and yields a cheerful, voluntary, sincere, and hearty obedience to them; arising from a principle of love to him, and joined with honour, fear, and reverence of him: so let the wives be to their own husbands in everything: political, domestic, and ecclesiastic; that is consistent with the laws of God, and the Gospel of Christ.”{Gill's Exposition}