Without Strength, Without Hope, Without God ~ Romans 7:8-13 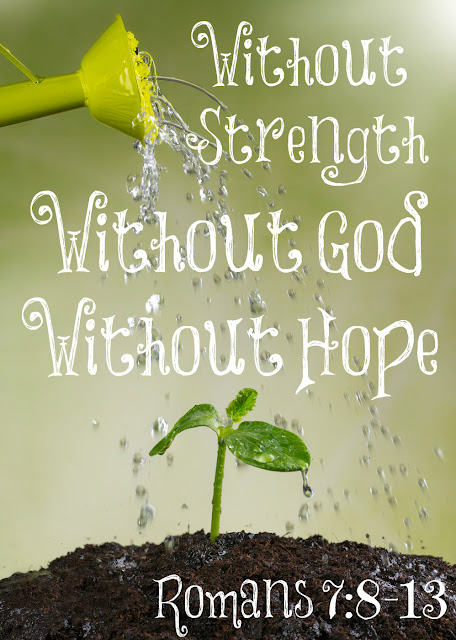 We have learned that when Christ died, we died. When He was buried, we were buried. When He rose again, we rose with Him. We are now new creatures in Christ and dead and freed from sin. We died to the Law, so was it the Law that caused us to sin? What was the Law's role in all of this and why does Paul speak about it so much?

But sin, taking occasion by the commandment, wrought in me all manner of concupiscence. For without the law sin was dead. For I was alive without the law once: but when the commandment came, sin revived, and I died. And the commandment, which was ordained to life, I found to be unto death {Romans 7:8-10} The Law was there to reveal sin, which it did very well. In the process of revealing sin, it magnified sin's presence by intensifying guilt. Before the Law did its work of revealing sin in Paul's life {and all of our lives}, when he was a young child and had no consciousness of his fault, he was without a sense of condemnation. Sin does not have the power to condemn and damn apart from the prohibition of the Law. When the child does grow into knowledge of good and evil, sin revives and the child becomes dead in trespasses and sins. The Law came to Paul as it does to all men; when he grew into a knowledge of good and evil. He died in the sense that he came under condemnation; dead in trespasses and sins since he clearly knew right from wrong.

The Law is high and holy, for it was given with a promise of eternal life for those who kept it. Death was a result of the sin, not the Law, but the Law was the occasion since no one can keep the Law perfectly. Paul is preparing his reader for the moment when he will present Christ as the answer to the ineffectual efforts of the Law. {One is not born "dead in trespasses and sins;" for no one has trespassed until he has consciously done so.}

For sin, taking occasion by the commandment, deceived me, and by it slew me {Romans 7:11}. When the Law first comes to such a man, it is a bright ray of light. Suddenly everything falls into place. For the first time, he clearly understands his duty. He no longer stumbles around in darkness groping for direction. The Law is a light unto his path; his steps are clearly marked before him. Oh, the joy of knowing what God requires. Now there is hope. "This do and thou shalt live." With the dawning of the Law, the deception of sin seems to disappear. At first, sin's power appears to be broken. It cannot abide the light of the Law. Truth sets one free. However, sin becomes the slayer, not the Law. Each man experiences his own personal awareness of moral defeat at that point when he has made a commitment to keep the Law and then realizes that with his best efforts he has failed. The Law shuts him out from the presence of God. He stands alone, without strength, without God, and without hope; unable to keep from sinning, thus failure to keep the Law.

Wherefore the law is holy, and the commandment holy, and just, and good {Romans 7:12}. Paul wants to go on record as saying that the Law is holy; it is good. There is no fault in the Law. The Law is perfect. It is appropriate. Its justice is supreme. It is a thing of beauty.

Was then that which is good made death unto me? God forbid. But sin, that it might appear sin, working death in me by that which is good; that sin by the commandment might become exceeding sinful {Romans 7:13}. The Law is good but by its very nature revealed our deeds to be sin in us. The effect was one of moral death since it exposed our sin and our inability to keep the Law. Tragically, we became aware of our sinfulness. The Law does work death, but only because it shows us clearly the presence of sin, which sin occurred as an act before the coming of the Law. So knowledge of the Law was the occasion of the death, but not the cause since we did sin before the Law.

In answer to the questions asked at the beginning, no, the Law didn't cause us to sin. It was the Law that made us aware of our sin and showed us how exceedingly sinful we are, thus guilty and condemned. We desperately need help since we are unable to do it on our own. We need a Savior! Christ Jesus is His name.