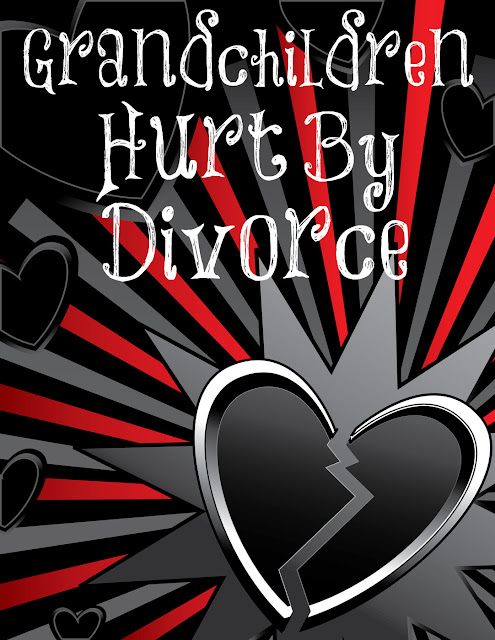 God hates divorce and He only allowed it due to the hardening of one's heart in the case of adultery or if one spouse leaves another and divorces them, thus they have been abandoned. We, as believers, should never have hardened hearts but be seeking peace, reconciliation, and forgiveness, especially in our most sacred of vows. Divorce has long term consequences, even to future generations. One woman was telling her story of divorcing her husband due to the hardness of her heart towards him. Years later, her granddaughter held her face in her hands and asked her, "Nana, did you ask for forgiveness from Papa {her grandpa} for divorcing him?" and she said, "Yes." "Did you ask my mama forgiveness for divorcing her dad?" and she said, "Yes." "Did you ask my aunts to forgive you?" "Yes," she replied. Then that little girl looked right in her grandmother's face and asked, "Why haven't you asked me for my forgiveness?"

Yes, divorce hurts your grandchildren. I know one young woman who has grandparents who stayed married even though it was a difficult marriage when they were younger. They are now very happy. Family get-togethers are huge and happy! The grandparents are there with their children, grandchildren, and even some great grandchildren. There is a lot of laughter and fun. Her other grandparents got divorced so that side of the family is splintered. There are never any happy times together. So many joyous occasions with all the members of that side of the family are not happening, because her grandmother decided she no longer wanted to be married to her grandfather.

Many wonder why a woman should stay married to a difficult husband. I am asked this often. I will give you my reasons. If she divorces her difficult husband he is no longer being "sanctified" by her presence. Jesus is no longer living with him since she, a believer indwelt by the Holy Spirit, has left him. The chances for him to be saved become much slimmer. The children are no longer sanctified. They will be at her home some of the time and see Jesus but then whenever they go to his home, they will no longer see Jesus or be influenced by goodness. She has no control over what the children may see or do with the man she divorced. The children will grow up angry at the mother or father or both. This anger could lead to bitterness which defiles many including themselves. The woman can no longer be home full-time with her children where she belongs and many times has to leave the home to look for a source of income, thus leaving her children with others. Her grandchildren will bemoan the large family celebrations she has taken away from them due to the fact that she didn't want to stick it out through good times and bad times with her husband as she had vowed.

This everlasting principle {"the wife is bound by the law as long as her husband liveth..."}, established at creation and affirmed by our Lord, has not lost its holiness or integrity despite the hardness of hearts and distresses brought on by people who fail to keep their marriage vows before God and man. The higher road is to honor one's vows and be faithful to that person with whom you are one flesh. And if your partner is unbelieving and does not honor the vow, putting you away, then remain unmarried or be reconciled to your spouse.*

And did not he make one? Yet had he the residue of the spirit. And wherefore one? That he might seek a godly seed. Therefore take heed to your spirit, and let none deal treacherously against the wife of his youth. For the LORD, the God of Israel, saith that he hateth putting away: for one covereth violence with his garment, saith the LORD of hosts: therefore take heed to your spirit, that ye deal not treacherously.
Malachi 2:15, 16