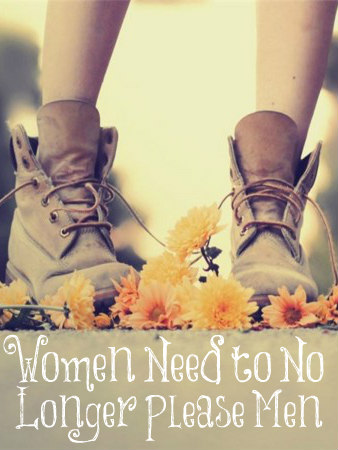 Women will get all dressed up for a night on the town with their girlfriends. If they have a job in the corporate world, they will get dressed up for this. If they're going out on a date with the guy they've had a crush on for a long time, they will look as best as they can for him! If they were going to meet a famous movie star or the President, you can bet they would get dressed up. However, encourage them to look nice for their husbands and they shout, "NO way!"

Here is a comment from another blog post, "In the olden days, people put so much emphasis on pleasing men...because women were totally dependent on them....so they kissed their @$$. Not today! Women are independent and no longer need to put up with that....thank goodness!" That's right; please almost everyone else but when it comes to your husband, you've got to be kidding! No wonder marriage is in the mess it is in.

In the "olden days" many women enjoyed looking pretty for their husbands or even if they were going to the grocery store they would dress up a bit. Yes, they worked hard at home since many did not have the modern appliances we have, but there wasn't this disdain for trying to look nice for men and pleasing them. They were dependent on men to provide for them and their children. This is the way God intends for it to be; there is nothing wrong with this! Unfortunately, even many Christian woman have the same attitude of not trying to please their husband.

It seems the harder women try to gain the respect they feel like they deserve, the more respect they lose. Men used to greatly respect women. They would open doors for them, carry heavy things for them, pay for them, protect them, and provide for them. Many men no longer respect women even though the women are highly educated with big-time careers. Why should they respect them as they have taken over their jobs, their place in society, and are no longer needed in many homes? The farther we get from biblical principles, the worse off everyone becomes, especially the children.

Women didn't kiss their husband's @$$ because they were totally dependent on them. They tried to look nice for them and please them because they were thankful for them; thankful they worked hard, took care of them and were there for them. They appreciated their man, unlike today. There was a comment on one of my posts from a man who was happily married and his wife was a stay-at-home mom, until her parents convinced her to get her Master's degree. She got it and began to make as much money as her husband. She hired a housekeeper and now their marriage is on the rocks with little to no time for intimacy or relationship. Do you see how backwards all of this is? Men don't want a competitor. They want a wife; a help meet who is appreciative of their hard work, their provision for the family, and enjoys pleasing them.

Please stop listening to what society is telling you and begin obeying what God tells you! If you are married, you are called to be a help meet to your husband. Look pretty for him. Depend upon him for his protection, provision, and his strength to lift heavy things and open jars. It's good to depend upon your husband! Show him your appreciation. Then guess what happens; your husband will have deep respect for you! Completely opposite of how society tells us to gain respect. Of course, the wisdom of God is foolishness to the world.

Her children arise up, and call her blessed;
her husband also, and he praiseth her.
Many daughters have done virtuously,
but thou excellest them all.
Proverbs 31:28, 29