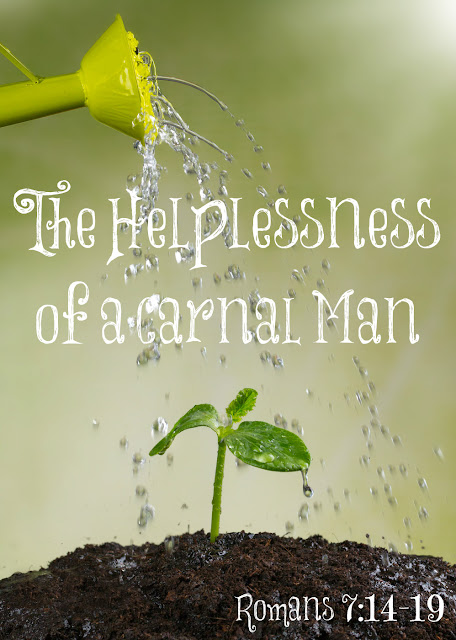 Many believe these following verses in Romans 7 show how weak we are to do what is right, even after we are new creatures in Christ, filled with the Holy Spirit, freed from sin, and told we can do ALL things through Christ who strengthens us. No, these verses refer to life as it was before Christ powerfully indwelt us and how no one could keep the Law or do what was right consistently no matter how hard one tried. The Law was weak, not due to any fault in its constitution, but because of the failure of anyone to actually accomplish it. In order to gain eternal life, one would have to keep the Law perfectly and nobody could except Christ.

For we know that the law is spiritual: but I am carnal, sold under sin {Romans 7:14}. Before Adam sinned, he was a composite of two planes of reality: one carnal {his flesh} and one spiritual. God had created a balance wherein Adam could find expression in both areas without conflict, but only one force could sit in the driver's seat. God intended for the human spirit to live in fellowship with God and so exercise control and discipline over the carnal drives. When Adam chose to follow his carnal drives - expressed in the act of eating the forbidden fruit - he rejected God's authority and so made a decision to live by the flesh. Adam had chosen a new master, and so God stepped back and gave Adam over to his choice. From that point forward, Adam and all his descendants became wholly carnal in orientation; given over to the flesh. The flesh itself is not sinful, but by preferring it over the will of God it becomes our master, our god.

For that which I do I allow not: for what I would, that do I not; but what I hate, that do I {Romans 7:15}. Carnal men, that is men who are in the flesh, end up walking after the flesh even though they may have good intentions fostered by the Law.

If then I do that which I would not, I consent unto the law that it is good {Romans 7:16}. "Even though I am not doing the Law, you can see by my failed attempt that I highly regard it. Otherwise I would not be making the attempt. My very efforts, though poor indeed, prove that I hold the Law up as desirable."

Now then it is no more I that do it, but sin that dwelleth in me {Roman 7:17}. Paul, in a sense only, disclaims responsibility for the source of sin, not to exempt himself from guilt, but, on behalf of all, to explain his inability to do the Law that he loved. The driving force causing him to sin was in the members of his fleshly body {flesh}, which is where the Law was weak.

For I know that in me {that is, in my flesh,} dwelleth no good thing: for to will is present with me; but how to perform that which is good I find not {Romans 7:18}. He further explains why he is not obedient to the Law. Through his failed attempts to do what he knows he ought, he has demonstrated that the will of man applied to the Law is not sufficient in itself to overcome the flesh. The evil was not in his nature, but his flesh - the old husband to which the woman was bound until his death. Paul is telling us that the carnal flesh has consistently proven to be the stronger impulse. This enslavement to sin and captivity of the will is the final result of walking after the flesh until it becomes a dominant habit.

For the good that I would I do not: but the evil which I would not, that I do {Romans 7:19}. Paul expresses the sentiments of all unregenerate men, testifying of his failure to do as he knows he ought. As with all men, there is that point at which human will is not enough to overcome on his own and without Christ in the most trying of circumstances.

Now if I do that I would not, it is no more I that do it, but sin that dwelleth in me {Romans 7:20}. It would follow that if a man is doing something different from what he wills to do, then some force is present stronger than his will. He defines that alternate force as sin dwelling inside; the sin dwells in the members of the fleshly body.

Do you now see that this couldn't possibly refer to life after Christ since Paul spent all of Romans 6 explaining to us that we were dead and freed from sin and filled with the Holy Spirit? Every day, you and I get to chose whether or not we will sin and we all know perfectly well that we can choose to not sin if we have the "want to" since we have been given everything we need for life and godliness and told that we are "complete in Him." Will we chose to sin? Yes, but it won't be the driving force in our life, it won't be our god, and the majority of time, we will chose to not sin and to do the right thing by remembering who we are in Christ and desiring more than anything to live a life pleasing to our Savior as we grow in the wisdom and knowledge of Him.

And such were some of you: but ye are washed, but ye are sanctified, but ye are justified in the name of the Lord Jesus, and by the Spirit of our God.
1 Corinthians 6:11


*The next verse begins HERE. The series begins HERE.
***From Michael Pearl's teaching with some of my thoughts