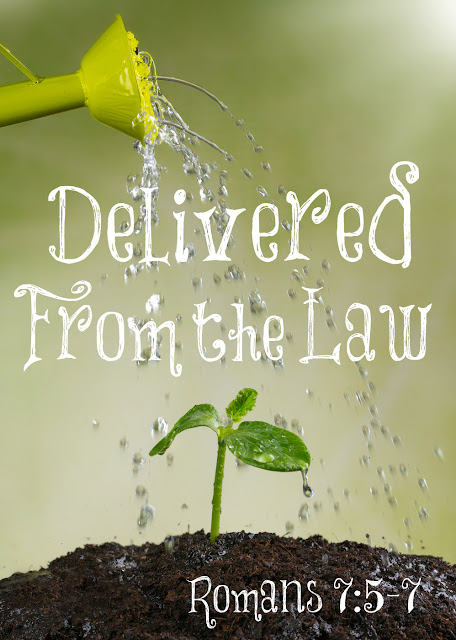 Many today believe we are still under the Law. I have written about this before in a post called Please Stop Living Under the Law. These next few verses also explain clearly why we are no longer under the Law and why we don't want to be under the Law!

For when we were in the flesh, the motions of sins, which were by the law, did work in our members to bring forth fruit unto death {Romans 7:5} Regardless of what you feel your experience to be, the Bible declares that the believer is NOT in the flesh. How did the flesh of the believer cease? It died when Jesus' flesh died. But ye are not in the flesh, but in the Spirit, if so be that the Spirit of God dwell in you. Now if any man have not the Spirit of Christ, he is none of his {Romans 8:9}. We must learn to walk by faith in the Truth of God's Word, instead of by our emotions and feelings!

The believer's death occurs in union with Christ's death {Romans 6}. Being wed to Christ, our own spirit is now renewed by the presence of the Holy Spirit, enabling us to serve our new Master. Before we were married to Christ, we served the old man, the first husband {the flesh}, under the letter of the Law. It was a cold, lifeless service, without grace, promising only death if we failed. It is not the written Word of God; it is "the ministration of death, written and engraven in stones," which Moses received on Mt. Sinai. Clearly this oldness of the letter is the old dispensation instituted at Sinai {the Law}, which is set in contrast to the new dispensation of Christ {New Covenant}.

What shall we say then? Is the law sin? God forbid. Nay, I had not known sin, but by the law: for I had not known lust, except the law had said, Thou shalt not covet {Romans 7:7} How can the Law be sin if it exposes sin? The letter of the Law caused Paul to see the spirit of his own heart. The Law is most effective in uncovering sin, even in the intentions. He will eventually arrive at the conclusion that, though the Law exposes sin, it cannot produce righteousness. Therein is its weakness. The Law defines the problem, but it cannot deliver a cure. Only Jesus' death on the cross and ours with Him provides the cure!

For I through the Law am dead to the Law, that I might live unto God. I am crucified with Christ: nevertheless I live; yet not I, but Christ liveth in me: and the life which I now live by the faith of the Son of God, who loved me, and gave Himself for me...for if righteousness come by the Law, then Christ is dead in vain.
Galatians 2:19-21