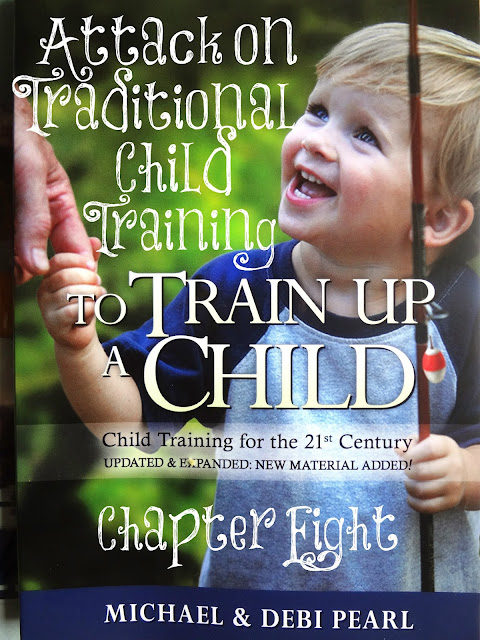 There are a few today who seem to be the ones leading the way into a depraved culture. Did you know that on my post that went viral, there were many more people who liked it than those who didn't? Here are the stats to it ~ 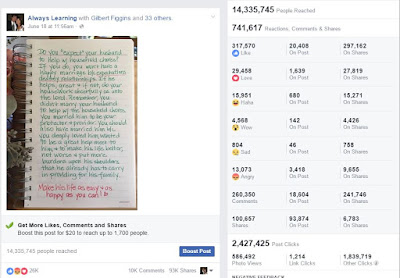 You would think from all of the negative comments and the two articles published about it that the majority of people hated it. The problem is that we are allowing this minority to define what our culture believes is right and wrong. Take my post about being available sexually for our husbands; they cry "rape!" What about teaching a wife to be submissive to her husband; they cry "abuse!" If anyone teaches about spanking a disobedient child on a bare bottom, they change it to "hitting" a child and label it "child abuse." Unfortunately, these few have even infiltrated the Church and teach error.

The principal at our elementary school when I was growing up had a big paddle on the wall of his office and he used it when necessary. There were so few discipline problems back then. The majority of children were spanked and this was common since time began. Before I came home full-time, I taught a sixth grade class and many of the children were out of control. Growing up lacking self-control is preferable to a whack on the bottom of a young child? Now, the new form of disciplining children is being angry with them and yelling. This is better? We rarely yelled at our children. We didn't have to since we trained them from the time they were young to obey us the first time we asked them to do something. They were well-behaved children. Yes, we spanked them on their bare bottom and it stung, but it was quickly over and did the job that we intended for it to do.

Michael Pearl spoke about the new "permissive" parenting that began in 1946 when Dr. Benjamin Spock wrote his book, The Common Sense Book of Baby and Child Care. "The American tradition of spanking may be one reason there is much more violence in our country than in any other comparable country,"  wrote Dr. Spock. He should see how violent our culture is today compared to back then. No one went into classrooms and murdered a classroom full of children like they do today.

Unfortunately, opponents make no distinction between measured, compassionate spanking and tyrannical, whaling, fist-pounding pyschos...They choose inflammatory language designed to project violence onto classical parenting and shut down any who would speak up in its defense...In the end, our silence will surrender long-established biblical parenting to the whining voices of left-leaning ideologues.* For the wisdom of this world is foolishness with God {1 Corinthians 3:19}.

Do you realize how many children today are on ritalin and other drugs? Few children were on drugs when I was growing up. In fact, I never heard of any! Today, 3.5 million children are being drugged into acceptable behavior because today's parents and schoolteachers have given up hope of instilling discipline.* Just as the left blames all of the mass shootings on guns, they blames "spanking" on all the violence against children today, instead of where it belongs, evil people with evil behavior.

Pearl then goes through numerous studies that have proven the benefit of lovingly disciplining your children by spanking them at appropriate times. One of them was Marjorie Gunnoe, a developmental psychologist at Calvin College, "According to the research, children spanked up to the age of six were likely as teenagers to perform better at school and were more likely to carry out volunteer work and to want to go to college than their peers who had never been physically disciplined."* "According to Jason Fuller, police reports indicate that since the spanking ban, child-abuse rates in Sweden have exploded over 500 percent!'*

The rod and reproof give wisdom: but a child let to himself bringeth his mother to shame {Proverbs 29:15}

Michael Pearl has been on numerous shows explaining his position on this topic. On one show in New York City, he found that the woman next to him on the airplane ride to NYC, the taxi driver, director of the show, make-up ladies, and back-stage hands were all spanked as children! However, many today have fallen for permissive parenting instead. If you draw a line through history at the point where spanking was abandoned, you will find that it coincides with significant increases in juvenile behavior, suicides, low self-esteem, self-loathing, and a general degeneration of society.*

Ken and I were spanked and so were our children. Our homes growing up were happy homes and so was our home that my children grew up in. Modern culture has so twisted everything that God has said is good and turned it into evil. Spanking in a controlled, loving manner results in good fruit, according to the Word of God. Who are you going to believe: our depraved culture or the Word of God?

Seeing then that all these things shall be dissolve,
what manner of persons ought ye to be in
all holy conversation and godliness.
2 Peter 3:11

*Quotes from the book