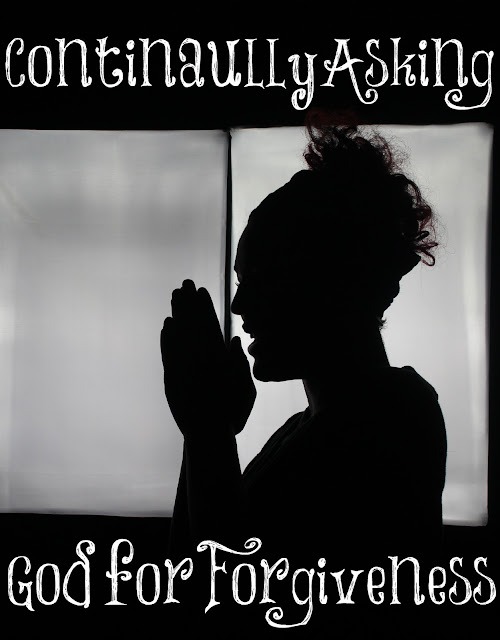 We love our new lives in Christ. We love being alive to God and freed from sin, knowing that each and every moment of the day we can choose to walk in the Spirit instead our dead flesh. Our new identity as new creatures in Christ, saints, and children of the Most High, has given us a joy and peace that was missing when we wrongly believed that somehow God's relationship towards us was affected by our need for regular cleansing. This cleansing was by way of daily confessing of our sins and asking for forgiveness, a theological concept wrongly taught in some churches.


Please don't misunderstand. Asking forgiveness in any relationship can be a very healthy thing. After all, you did the sin, and you should feel guilty because you are guilty! We unfortunately still sin even after we have been forgiven all of our sins, past, present, and future, but the penalty for that sin is already paid once and forever on the cross.

This is the great news of the gospel that Christ "died once for all sin, for the just and unjust that He might bring us to God" (1 Peter 3:18), and He has "offered for all time a single sacrifice for sins" (Heb, 10:12). In light of this great news, should we as believers keep asking God for daily forgiveness of our sins?

Some will ask forgiveness many times, over perhaps many years, for particularly bad sins they have committed, because of the guilt and remorse they feel. Others want to start fresh each day with the Lord by cleaning the slate of the previous day's sins. There is probably nothing terribly wrong with either of these things, but they are unnecessary spiritual exercises. A simple "Thank you Lord for forgiving my sins on the cross in 30 A.D." would suffice, and may actually give the believer far more assurance of the saving grace of Jesus.

The more problematic theology is one that teaches that somehow we as believers can actually affect the grace of God by our prayers of confession. That apart from our confession of sins the sins cannot be forgiven. After all for some, prayer becomes a work they do to merit the grace and forgiveness of God, instead of viewing the exercise as simply agreeing with God that sin in any form does not belong in the life of the believer. "I am so sorry" is much more theologically correct than asking for forgiveness because forgiveness is already granted.

The story is told of the little boy who was visiting his grandparents and was given his first slingshot which he played with in the woods. Not having any success hitting anything he headed home and in the distance, he saw grandma's pet duck. He wound up, and bullseye! The duck fell over dead. He panicked and quickly covered up his sin by putting the dead duck under the woodpile. Just as he emerged he saw his sister smirking as she had witnessed the act. For several days the sister used her power over her brother to make him her slave. He couldn't go fishing with grandpa, had to do all the dishes, whatever the sister wanted she got with the whisper of the words, "Remember the duck!"

Finally, the young brother could take it no more and went to Grandma and confessed the sin of killing her duck. To his surprise, Grandma's remark was, "I know, Johnny. I was standing in the window and saw the whole thing. And because I love you, I forgave you. And knowing that I loved you and would always forgive you, I wondered just how long you would let Sally make a slave of you."  (Carl Hoefler -Will Daylight Come? C.C.S. Publishing, 1979).

The guilt of sin and Satan's whispers keeps many fine Christians in slavery. Even as God says, "For you did not receive the spirit of slavery to fall back into fear, but you have received the Spirit of adoption as sons, by whom we cry, "Abba! Father! The Spirit himself bears witness with our spirit that we are the children of God" (Romans 8:15-16).

So where does this fear come from that somehow we must confess our sins for regular cleansing of sin? That somehow God's view of His relationship with us is affected by the works of confession, prayer, and penance? These things may have some value in making the Christian feel better, and help clear the heart and mind of the Christian who sins, but our standing as sons of God and joint-heirs with Christ is not conditioned in any way on any of these things, or any works whatsoever. The basics of Theology 101 teaches us, "For by grace you have been saved, through faith, and not of ourselves, it is a is a gift of God, not of works lest any man boast" (Ephesians 2:8, 9).

Let me point out that one of two things, or both, must happen if somehow our standing with God is changed each time we sin after being saved and becoming united with Christ Jesus in His death. Either God's initial work of salvation is not complete, and each sin, at least the bad ones, puts us back out of His family. I was talking to one long time believer who had no assurance of salvation as his church teaches that unless you ask regular forgiveness of sins, God does not grant it. Grandma can give unconditional love when her grandson sins against her, but God's love is not so inclined?  Hmm... This is not what my Bible teaches.

The second view is of a God who changes His countenance towards his child each time we sin. The disappointment or anger arises, the finger wagging starts, and God is sitting by waiting for us to come to Him and admit, "I killed the duck." Neither view can be further from the immediate and complete grace of salvation granted by the New Covenant. The New Covenant is completely one sided, and only God must be true to His Word, that once we are in Christ, we are His forever. There is no going in and out of salvation, but there may have been no real transformation into the God's family in the first place if the person is now wallowing regularly in sin.

So where does this view originate that we must continually confess our sins and ask for forgiveness in order to gain God's grace and smiling face? It probably comes from multiple sources, but the two main sources are first, the Old Testament model that the church adopted with priests hearing confession, and the second is the fleshly tug upon us to somehow merit God's grace. The OT prescription for sin was clear. You sin, get to the temple and make a sacrifice for your sin, for "without the shedding of blood there is no forgiveness" (Hebrews 9:22).

In Israel's day, each year a sacrifice was offered on the Day of Atonement for the forgiveness of the sins of the people. Two goats were selected for the offering and lots were cast. The goat where the lot fell got slaughtered and sacrificed with its blood sprinkled on the God's Mercy Seat in the temple. The second goat became the scapegoat that the High Priest placed his hands on its head and prayed, then sent it scurrying into the wilderness. This is an illustration of God's grace and forgiveness for the people.

For too many Christians, and some churches, confession of sin has simply taken the place of the OT sacrifice. No matter how clear the writer of Hebrews has made it that Jesus is the one and only sacrifice that all other sacrifices pointed to. That Jesus was God's final sacrifice prepared before the world began, to make atonement for all sins, once and forever. And that mankind is not forgiven on the basis of the confession of sin, but rather by grace through faith in the atoning work of Christ Jesus. He is our propitiation for our sins, and not only ours but the sins of the whole world. But to attain God's grace, and His great salvation, one must confess with their mouth Jesus as Lord, and believe in their heart that God raised Him from the dead. (Romans 10:9).

Please Christian, if you are one who sees your sins as unforgiven, rest assured that if you are in Christ Jesus, every sin you have ever committed, or will commit, has been forgiven you on the cross in 30 A.D. and there is no reason for Christ to revisit the cross for you. If you are unsure of your salvation, rest in God's promise that if you believe in Him, nothing else is necessary for your salvation. Yes, the natural acts of one who has accepted God's pardon will be first true and lasting repentance, then we grow up into Christ Jesus, becoming like Him more and more each day. We allow Him to live in and through us, causing us to bear good fruit that comes from a walk in His Spirit. If you have no fruit of salvation, tap into the source of life by not quenching the Spirit with your disobedience, but instead walk in newness of life for which we have been called; saints, beloved children of God, and heirs of salvation. Start becoming who you are already in Christ Jesus our Lord, without fear, but instead, a true and loving relationship with your Maker.

For Christ has entered, not into holy places made with hands, which are copies of the true things, but into heaven itself, now to appear in the presence of God on our behalf. Nor was it to offer himself repeatedly, as the high priest enters the holy places every year with blood not his own, for then he would have had to suffer repeatedly since the foundation of the world. But as it is, he has appeared once for all at the end of the ages to put away sin by the sacrifice of himself. And just as it is appointed for man to die once, and after that comes judgment, so Christ, having been offered once to bear the sins of many, will appear a second time, not to deal with sin but to save those who are eagerly waiting for him.
Hebrews 9:24-28

Footnote:
It is interesting to note that the great Apostle Paul never commands that we confess our sins or continually ask for forgiveness of our sins. But some will say that the New Testament teaches us to confess our sins when the apostle John writes: "If we confess our sins, He is faithful and righteous to forgive us our sins and to cleanse us from all unrighteousness" (1 John 1:9). We see this confession at the moment we accept the Lord Jesus Christ into our lives. Part of repentance is to confess (agree) with God over my sins and the need for a Savior. So 1 John 1:9 is referring to our salvation moment, not the need for regular confession to God.

A second instance is found in James 5:16: "Confess your sins to one another ... that you may be healed."  We do believe that confession has a place in the life of the sinning Christian who may have gone months or years without exposing his sin to the light and allowing God and fellow believers to pray on his or her behalf. Sin after a believer is saved will have natural physical, emotional and mental consequences from the sin and its guilt, but also will incur the discipline of the Lord. Confession to receive healing in such cases is prescribed, but such confession does not change the believers standing for God as "in Christ." When Christ sees you and me He sees perfect Jesus in our place. His record is now my record, and He has paid the penalty for my sins. And without this precious promise, we would all be hopeless.