Is it a Sin for a Wife to Deny Her Husband Sex? 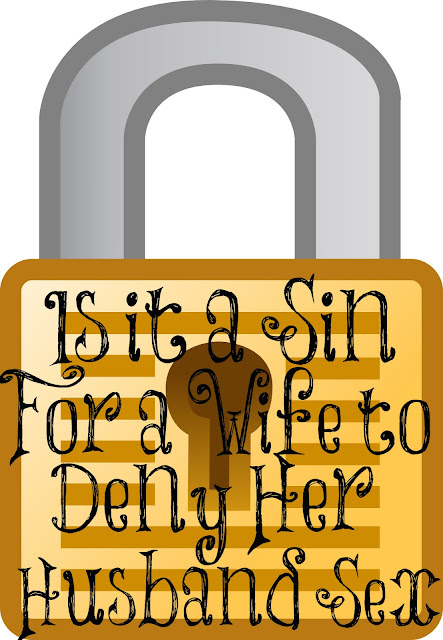 The article in the US Weekly claimed that I said this; "The devout Christian believes it's a sin for a wife to deny her husband sex." Have I ever said this before? Do I believe this to be true? Let's see what the Bible says about it. Sin is doing anything against what the Lord has called us to do. Here are some verses that can help us figure out if denying a husband sex is sin.

"Nevertheless, to avoid fornication, let every man have his own wife, and let every woman have her own husband. Let the husband render unto the wife due benevolence: and likewise also the wife unto the husband. The wife hath not power of her own body, but the husband: and likewise also the husband hath not power of his own body, but the wife. Defraud ye not one the other, except it be with consent for a time, that ye may give yourselves to fasting and prayer; and come together again, that Satan tempt you not for your incontinency (lack of self-control)" (1 Corinthians 7:2-5).

God commands me to teach women to love their husband in Titus 2:4. A huge part of loving their husband is giving them sex frequently and whenever they want it. The exception is if they are both fasting and praying over something. I would think most husbands wouldn't ask for it if the wife is sick (the "headache" excuse doesn't qualify) or in pain for some reason but other than these reasons, wives shouldn't deny their husband and they shouldn't just do it because they "have" to do it but because they want to do it to please their husbands in this way. They should have a disposition to do him good and not evil.

There are many men today, including Christian men, who are being denied sex by their "godly" wives. Did you know this is actually emotionally painful for them, godly wives? We are not to deny them so they won't have to use self-control beyond what they are able. Don't put your husband in this situation. Part of the reason he married you was so he could have sex with you often. Men need this and this is why Paul said, "It is better to marry than to burn." Most men burn if they can't have regular sex with the woman they are sleeping beside every night.

If you have a higher sex drive than your husband and he isn't meeting your need, I encourage you to read this post by thejoyfilledwife. In conclusion, yes, it is sin if you are denying your husband sex and it is a dangerous place you are putting your husband in, so stop doing it. Be willing and available to the man who committed his life to you. God clearly wants us to obey what He has told us to do for a reason so it is good to not disobey Him.