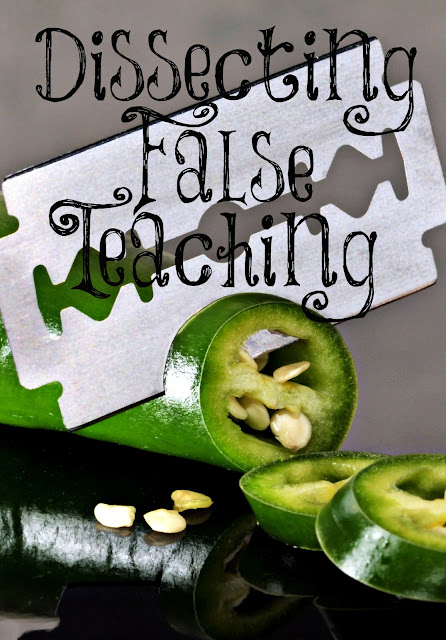 A woman left this comment on yesterday's post about women being preachers and leaders in the Church. {I didn't publish it since I don't publish posts that are completely contrary to what I am teaching.} She is a pastor's wife who said her husband is helping her to be set free from the bonds of culture and man-made rules. But somehow it seems she is being set apart from the actual Word of God to make up an argument that women may be leaders in the church. I am going to reason with her by using what the Word of God does say, believing that God would not be silent on such an important issue. She feels that the last fifty years of feminism has nothing to do with her thinking. Her comments will be in quotation marks.

“Hi Lori. I agree, just because you cannot get your head around it does not mean it is right. Man bashing is no good. Usually when we grow up worshiping traditional man made rules it is hard to break free. I used to believe similarly to you however felt a burden in my spirit I could not shake. My sweet husband, a pastor, showed me women are of equal value in the Bible and Jesus himself championed women and He himself broke free from cultural man made rules. I am free and more alive today more than ever. I pray the same for you sweet sister.”

Yes, Jesus loved women deeply and the rules He freed us from were from the Law, so that we may be free to please Him in all things He requires of us. We live in the New Covenant of grace, but it doesn’t give us the freedom to sin or make up our own rules. It gives us the freedom to walk in obedience to Him. {Study the book of Galatians.}

“Each Bible verse you mentioned is only reading the surface of what the Bible is saying. In Timothy, Paul was writing a specific letter to a specific church about a specific problem they were having with women in that church. Same with 1st Corinthians the women were speaking loudly in church and asking questions when they should have kept quiet and asked at home and not interrupted service.”

Sorry, but Timothy was written to a young pastor heading out to do ministry in many churches, not one church. Is it not interesting that Paul is teaching this to his seminary students Timothy and Titus instead of a particular church? He obviously intended it for all the churches. Have you considered that if your premise is correct and that somehow the universal church, East and West, missed these important principles of women not being in leadership positions for almost 1950 years?

Are we to believe that the women issues Paul addresses are somehow unique to that day and church, and the somehow female characteristics are not the same from church to church? Are the women in the Corinthians church more outspoken, and in need of greater male leadership than other churches? Do the churches today have women who are meek and quiet, respecting authority and never wishing to speak out of turn? No, Paul encouraged that his letters be read by other churches {Colossians 4:19}, and indeed the Spirit of God who inspired his words guaranteed they were read in all churches throughout church history, knowing that his instructions applied to all within the body of Christ.

“And if a deacon is to be the husband of one wife- that would disqualify Jesus and any single man. That Greek word meant One-man-woman which means monogamous.”

Jesus had no need to be a deacon or elder when He is King and Lord. Our Savior remained single for one purpose; to save us from our sins. Paul makes it clear that men were to be the “husband of one wife,” or literally "a one-woman man." A single godly man can still be a "one woman man," but if that excludes unmarried men, so be it. It still does not prove inclusion of women. And I ask the important question again, "How did 1950 years of church history miss such an important point that women are to also be elders?" And to think this "ah ha" moment happens just as feminism takes root in the world. What a coincidence!

"There were numerous women leaders in the Bible (Deborah was a judge, Junias was an apostle, Phoebe, Priscilla, Chloe, Mary, and the list goes on) "

This unreal argument keeps being postulated and it has zero basis in fact. Well, let me rephrase. It may have a one per cent basis in fact, but the sample is so small one can hardly argue for "numerous women leaders." Sure, Deborah was an Old Testament judge during the time when Israel was in rebellion to God and was called “the mother of Israel.” But tell me how many priests and women rulers do we have in Israel? Zero!

Turning to the New Testament, Jesus does radically embrace women in a way that greatly elevates their status. And yet, names not one of them to be His disciple, let alone be one of the three in His inner circle. Junia was most likely a man, not a woman. And if it was a woman, she was "of note among the apostles."  Why note that she was prominent if she actually was an apostle? Are not all apostles prominent?  So anchoring a radically new historical change in the Church upon a person we know nothing about would be malpractice and would get thrown out as trivial evidence if this was a court of law. Paul calls Junia "my kinsmen." A kinsmen would most likely refer to Junia being a man.

To be named as significant in the Bible does not confer any leadership position within the church. Mary was the most blessed mother of Jesus, but significance and recognition is not the same as leadership. To be a leader, by definition one must have followers and rule over someone. We know of no followers for Phoebe, Priscilla, Chloe, Mary, "and the list goes on." Who did they teach? What epistle did they write? What church did they lead? Silence! The Bible is completely silent as to any New Testament woman who taught in the churches, or was a leader. Priscilla is always mentioned in ministry with her husband. The Bible never mentions her as a leader. The silence is deafening when looking for these numerous women leaders.

Let's not forget Phoebe who was a servant in the church. The word deacon literally means servant. The church would suffer greatly if the women were not allowed to be servants to the church body, but this does not convey a leadership position.  There is a class of deacons that serve the elders and the church, but they too must be "the husband of one wife" or more literally "a one-woman man." This excludes woman from even the lower church positions of deacon, and to make it more clear Paul writes,

"Then let them serve as deacons if they are found blameless. Likewise also their wives must be dignified, not slanderous, temperate, faithful in every respect. Deacons must be of one wife..." {I Timothy 3:10-12}.

“Praise God His Word is living and active and useful for teaching, correcting and training in righteousness - not just reading a story with zero background to who it was written to or when.”

Amen to that sister!  Yet the Word you believe in is so weak that it was silent on any instructions for placing women in church leadership? Is this all you have to go on when going against the plain teaching of the Word which says,

"I do not permit a woman to teach or exercise authority over a man; rather, she is to remain silent. For Adam was formed first then Eve. And it was not Adam who was deceived, but the woman who was deceived..." {I Timothy 2:12-14}

Note in the above verse the reasons Paul, by inspiration of the Holy Spirit, gives for why woman cannot be church leaders. His reasons predate culture and goes back to the beginning of time. The Word says, Adam was made first, and Eve was deceived. Case closed! There is no cultural argument to be made if you believe the living and active Word!

“I believe in marriage, in women and men growing toward God together, and I pray one day you can feel free enough to experience this in Jesus. He wants it for you sister. Much love for the work you are trying to do, sadly it may be doing more harm than good. Look deeper in the Bible and the original text to what our loving Jesus was really saying to us not just what we were taught 50 years ago. Either way- we both agree Jesus is the only way.”

I also believe in marriage, but I don’t need to “experience” Jesus any other way than by faith. He is my risen Savior and has freed me from sin, death, and the wrath to come. His Spirit lives inside of me convicting and challenging me continually through His Word that never changes. Yes, Jesus is the only way, but His admonition to us is to do as He has told us to do. We must never take this lightly or diminish how the Word of God commands for us to live.

It's so easy to believe things like this woman unless you know the Bible. Study it and know it so you will have a good defense of your faith. I have never been happier and experienced Jesus in a fuller way than when I gave up my rebellion to God and husband and willfully placed myself under the Lordship of Jesus, and the headship of the man God gave me to love and serve. What a sad view of the inspired Word of God one must have in order to make it fit the culture of our times, instead of allowing the Word to transform our churches, and our culture. God could not be clearer on His instructions that in the church, the godly older men are to be the leaders and the women may serve the body, not lead it or teach it.

As also in all his letters, speaking in them of these things, in which are some things hard to understand, which the untaught and unstable distort, as they do also the rest of the Scriptures, to their own destruction.
2 Peter 3:16