A Heavenly Boss with a Sacred Job 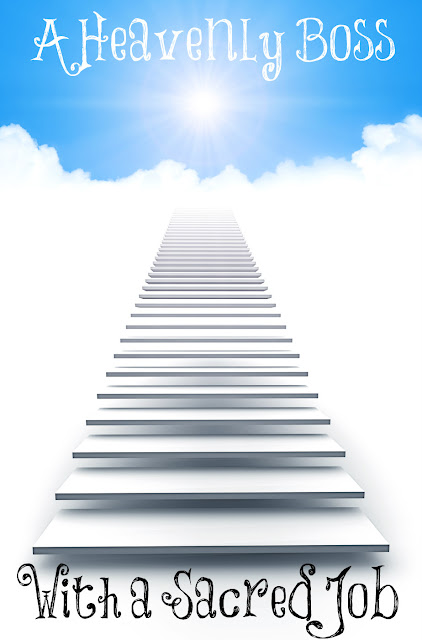 One woman wrote me and told me her church now has a female pastor. She was concerned about this so she wrote her pastor a letter and her pastor wrote her the following response.

"As to Sue’s ordination {named changed}, I’ve attached what I wrote to our congregation about Sue’s ordination. I think it explains my view simply and clearly. I obviously have no issue with Sue being ordained and using her gifts to the fullest. Women exercise authority over men all the time. Sometimes we even recognize when they’re doing so! Influence, responsibility and authority are intertwined when someone is using their gifts, particularly gifts of leadership, which is not gender-specific. The Bible says much more about women in ministry than the one verse you refer to from Paul’s writings and I think it would be helpful to have a more balanced perspective." {End of her pastor's note}

“The Bible reveals this pattern of male leadership in the church and in the home as enduring and authoritative. We have no right to reject or to compromise clear teachings of the Bible in order to meet the demands of today’s political correctness. The Word of God is eternal and totally true. Without a firm biblical foundation, the church ceases to be a church in anything but name. It has become nothing more than a voluntary association with a liturgy." {Dr. Albert Mohler}

“Throughout the Old Testament, women were active in the religious life of Israel, but generally they were not leaders. Women like Deborah {Judges 4} were clearly the exception and not the rule. There was no woman with an ongoing prophetic ministry. No woman was a priest. No queen ever ruled Israel. No woman wrote an Old Testament {or New Testament} book. Isaiah 3:12 indicated that God allowed women to rule as part of His judgment on the sinning nation.” {Dr. John Mac Arthur}

"As for my people, children are their oppressors, and women rule over them. O my people, they which lead thee cause thee to err, and destroy the way of thy paths." {Isaiah 3:12}

When women rule they lead others into error and destroy the paths of the Lord. Instead of women being in the home, loving and obeying their husbands, loving their children, being keepers in the home, chaste and discreet, they have left the Lord's path and listened to the lies of females in leadership positions. If your church is ordaining women, find another church. Find a church that values the Truth of God's Word and His ways. It's highly unlikely that you will find a church that preaches a woman's role as boldly as John MacArthur does; so go and teach any women who will listen about their biblical role. The way to fight this battle is with the Truth of God's Word because it never comes back void.

The Lord is your Heavenly Boss and He has given you the sacred job of being home, being a help meet to your husband, and raising godly offspring. Rejoice in this and be content for this is exactly where He wants you.

The further a society drifts from the Truth,
the more it will hate those who speak it."
{George Orwell}