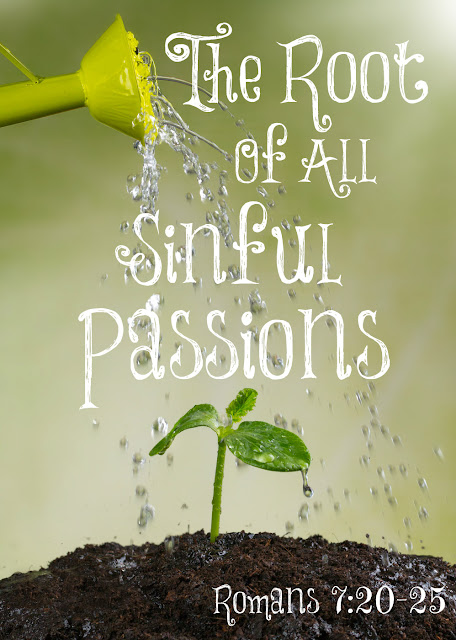 We have no ability to not sin without Christ; we are in bondage to sin and enslaved to it. The Law gave us no power to overcome sin; it simply pointed out our sin. Paul is near the end of his argument to show that what the Law was powerless to do, Christ did for all who call upon His name.

Now if I do that I would not, it is no more I that do it, but sin that dwelleth in me {Romans 7:20}. It would follow that if a man is doing something different from what he wills to do, then some force is present stronger than his will. He defines that alternate force as sin dwelling inside. Sin dwells in the members of the fleshly body. In the following verse and on into chapter 8, Paul will speak more of the body of flesh, which contains the root of all sinful passion.

I find then a law, that, when I would do good, evil is present with me {Romans 7:21}. Remember, Paul is building a case for faith over against the Law. He is preparing his readers for the moment when he will say, "for what the Law could not do, in that it was weak through the flesh...Christ did." There is something in me that corresponds to the evil without. Therefore, that which is within, the uncontrolled passions, must be evil too. There is such affinity between the temptation without and the drive within, and the failure of the will to overcome is so consistent, that it takes on the nature of a law, a working principle, a rule.

For I delight in the law of God after the inward man {Romans 7:22} Over against the law of sin within is the Law of God without. Yet his inner man, the self that inhabits the outer body, delights in that Law of God. He knows that the Law is good and that it is was created by God, so he delights in it with his mind.

But I see another law in my members, warring against the law of my mind, and bringing me into captivity to the law of sin which is in my members {Romans 7:23}. The root of sin was not in his will, his mind, or his emotions. All of these were arrayed against sin, and all failed to overcome the law of sin dwelling in the members of his flesh. The problem was not in his inward man; it was in the outer man, the body of corruptible flesh, the carnal man, the natural man, the Adam man.

O wretched man that I am! who shall deliver me from the body of this death? {Romans 7:24} The Law made him wretched; it exposed his sin. Paul, on behalf of the human race, cries out his lament. He seeks deliverance, not from a will he supposes to be in bondage {not from a "sinful nature"}, but from his body of flesh, the same body that died in Adam. To this point, his lengthy discussion has been devoid of Christ, faith, and salvation. He now answers the dilemma.

I thank God through Jesus Christ our Lord. So then with the mind I myself serve the law of God; but with the flesh the law of sin {Romans 7:25}. Thank God, not through the Law, but through Christ Jesus! This chapter has been a detailed description of what Paul means by "serving God with his mind." It has nothing to do with walking righteously, for while he delighted in the Law of God after the inner man, he served the law of sin with his flesh.  Paul, the person, is said to serve the Law of God, but the flesh served sin. There is no hope that the Law will ever bring deliverance. He doesn't lack teaching, convictions, commitment, repentance; he lacks inner power to overcome his body of flesh as we all do without the power of Christ living mightily within us.

This forms the ground for his introduction to the way of deliverance in Christ. If Christ only forgave sin and didn't deliver from the act of sinning, Paul's argument would carry no weight at all. If your Gospel doesn't free you from sin, you have a weak gospel. In Chapter 8, he will tell you that what the Law could not do because of the weakness of the flesh, Christ did!

"Your prayers, and your repentances, and your tears--the whole of them put together--are worth nothing apart from him. None but Jesus can do helpless sinners good; or helpless saints either. You must be conquerors through Him who hath loved you, if conquerors at all." {Charles Spurgeon}

* Next verse is HERE. *The series begins HERE.
***From Michael Pearl's teaching with some of my thoughts