Are You Wasting Your Life at Home? 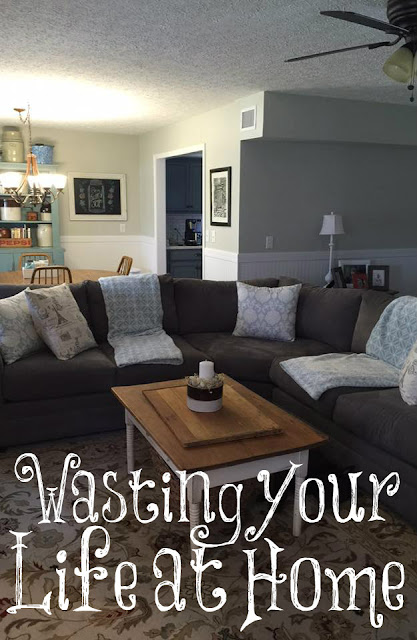 Feminists won because they were able to convince women they had no worth staying at home raising children and being a homemaker. They convinced them that these things were boring and there's so much more life "out there" {wherever that is}. Women fell for it hook, line and sinker, including Christian women. Mrs. M. commented on one of my posts and showed the error of this thinking.

A major problem with the way our society thinks is that they assume the only way for a woman to use her intelligence, talent, and gifts is through a paid career. They assume if you don't have a paid career you are wasting your life. They fail to see that a true "help meet" has endless opportunities such as ~

Teaching their children apologetics, theology, history, and reading great literature with them. Reading and learning about finances and economics in order to better run the household and the family budget. Learning about nutrition and home healing remedies. Exercising their creative talents by baking, cooking, decorating, creating, etc. Discussing world events and politics with their husband over dinner. Being a fruitful member of the household of God by actually having the time to participate in ministry and devote to prayer. Using their gifts and talents to help further their husband's career, whether that means proofreading speeches, entertaining colleagues, or giving wise perspective {when asked} about problems at the office. To say a woman needs a paid career to use her gifts, talents, and brain is such a narrow-minded view of the matter!

It's ridiculous that feminists were able to convince women that hurriedly leaving your home each morning, driving in traffic, working for someone else from 9:00 to 5:00, rushing home, trying to do all the housework, get dinner ready and fall into bed exhausted each night just to wake up the next morning to do the same thing is better than being at home full-time. Here is a quote from a post called The History of Womanhood That Feminists Don’t Want You to Know

"In Scripture, man’s work and woman’s work are equally valid – wifehood, motherhood, homemaking, and femininity are not belittled, and women are not guilt-manipulated into living and acting like men. On the contrary; woman’s distinctiveness from man is praised and honored, and her unique role is held vital. Women were to be protected and cherished, to 'attain honor' {Proverbs 11:16} and be 'praised in the gates' {Proverbs 31:31). It wasn’t until the advent of women’s 'liberation' that women were told, 'Your value as a woman is determined by how well you can perform as a man. Being a woman is no longer enough.'”

Enjoy being a woman, women! Cherish the role the Lord has given you. I have always loved being female and feminine. I love that my husband is male and masculine. I love the differences between male and female. We should rejoice in the differences of these roles instead of trying to be something we were not created to be. You aren't wasting your life at home. You are right where you are supposed to be!

Many daughters have done virtuously,
but thou excellest them all.
Favour is deceitful, and beauty is vain:
but a woman that feareth theLord, she shall be praised.


Give her of the fruit of her hands;
and let her own works praise her in the gates.
Proverbs 31:29-31