Alyssa is Getting Married Today! 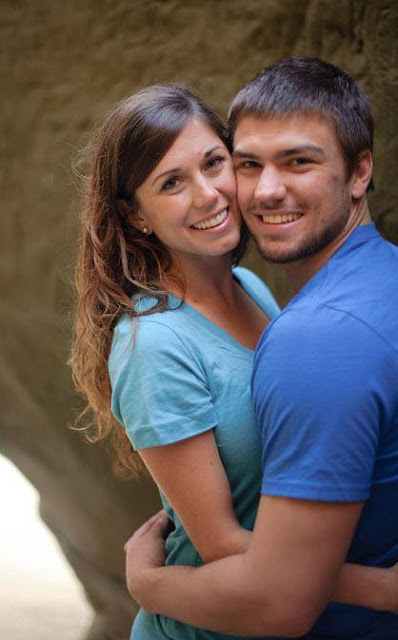 It is finally here. All the thinking and planning have finally come to an end and the party begins. She will begin a whole new life today with Jonathan Hustedt. They are perfect together. They make each other very happy. They love and value the same things.

Jon once told me that Alyssa is the best friend he has ever had. Alyssa told me the other day that there isn't anything she would change about him. It has been so fun to watch their love story unfold and wait excitedly for this day.

They will have a good, strong marriage because they have determined to do so. They are committed for life. Lord willing, they will grow old together and be a testimony to those around them of God's faithfulness. May God continue to bless both of you abundantly as you seek to love and follow Him. I love you both so much!

Here is Jon's side of their love story.  I know a lot of you have already read it on their wedding website but I wanted to have it someplace to keep so I'm posting it here:
I distinctly recall, about a year ago, confiding very cautiously in Tyler LaBelle, that I might, just maybe, like Alyssa. I had to be careful who I told because failure was an ever-present reality.

Until that point, I had hardly more than observed Alyssa around the Alexander house when she would be home from Jackson for a visit. I immediately noticed countless admirable qualities about her, none more obvious than her ability to make me feel like I had no chance. Her confidence was unshakable, and her steady composure didn't entertain the hindrance of a guy like me. At this, I conceded any efforts to steal her attention, and I tried to convince myself that she wasn't all that great. My plan didn't work for long.

The night that I realized I could no longer ignore Alyssa was after she had visited a bible study that Ben Weiland and I had lead and inadvertently made a huge impression on everyone there. My all-guys prayer group at the end of the night was distracted by talk of "the new girl" who was "the hottest and holiest" they had ever seen. I haven't stopped crushing on her since.

At that point I needed a second opinion on my chances. So I told Tyler that I would do my best to hang out with her when she was home for Christmas break and I would "see if I liked her". In reality, I wanted to see if there was any possibility of her liking me. Tyler wasn't optimistic.

Nevertheless, I forced my way into some Christmas shopping that I knew she needed to complete, but I had no reason for. I tried my best to be interesting, but I grew more disheartened as time went on, and Alyssa didn't let her stone-cold poker face ease one bit.

My next chance was at Ryan and Erin's wedding. I almost flirted myself to exhaustion trying to get Alyssa's attention, all the while trying not to jeopardize my poise, of course. The closest I came to a breakthrough happened after waiting up until midnight to get a chance to talk to her alone. I feel like I did a pretty good job, but again, Alyssa didn't flinch, and I went to bed exhausted, wondering if my efforts were in vain.

I accepted the invitation to spend a week with the Alexanders in Door County, solely motivated by my third (and final, I was sure) chance to make something happen with Alyssa. After some talk of her considering moving home from Jackson for good, I was eager to offer my advice. Much to my dismay, immediately after meeting her at the airport in Milwaukee I learned that she had made the decision to stay with Ballet Mag and continue touring for at least another year. I thought to myself, "Well, I made the trip out here; I may as well give it my best shot."

Thus ensued a week of swimming in the lake, conversations by sunset and exploring Door County on mopeds, all in an effort to pique Alyssa’s interest in me. I have never had to work so hard in my life. At the end of it all, with no more than a day left to spend, I went all in and professed to Alyssa my profound admiration toward her, explaining that if she would just move home, I would pursue her wholeheartedly, just like she deserved. I closed my eyes, gritted my teeth, and awaited her reply...

...it couldn't have been more devastating. My senses deserted me. My stomach fell out. I felt as though my mind had left my body, and I was watching the situation unfold from a third-person perspective. Alyssa was turning my down, and there was nothing I could do but watch.

She explained with perfect prose that she felt good about her decision to stay in Jackson, and she was content being single for the time being. I was completely unable to formulate coherent thoughts from that point on, so I politely wished her a good night and went to bed.

I didn't sleep for long. I woke up with a bothered mind and did my best to shake it all off with a five mile run and an early morning swim in the lake. Upon my return I found Alyssa sitting on the back deck, overlooking the lake, reading her bible - of course. Decency told me that I should initiate conversation even if just to apologize for even mentioning the idea that she would date me.

I ventured a shaky sentence, "Umm...so, sorry about that conversation last night - it was out of the blue, I know." She made an effort to go easy on me. "No, I'm glad you told me how you feel. Don't apologize."

I spent the next few seconds thinking to myself about how post-rejection sympathy is the kind of sympathy that hurts more than it helps. But I was caught completely off guard by her next words. "I need to tell you that I like you too."

It took some time for the idea to take root in my brain. Excitement rose slowly from my stomach to the top of my head until my ears were ringing. I tried not to show it. I felt as though my heart was sending high voltage messages to my brain that my brain wasn't sophisticated enough to understand, so I said something stupid like, "Well, that's good to know."

The sun broke through the clouds a short while later ending two days of gloom. The waters of Lake Michigan turned from gray to blue. The temperamental weather of Door County, Wisconsin seemed to be mimicking my troubles, but the obvious metaphor actually didn't occur to me until several days later.

Alyssa became my girlfriend the following Sunday. We were engaged less than four months later. Even still, I often wonder to myself how this could all be real and the butterflies in my stomach regularly taunt my efforts to maintain my usual stoic manliness. I can't help but act giddy when I'm around her.
--Jon

An excellent wife who can find? She is far more precious than jewels.
Proverbs 31:10