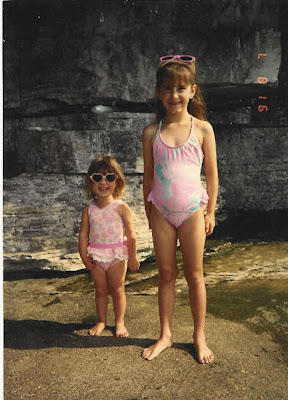 Cassi and Alyssa 1991 ~
They wrote love letters when they were young...well, maybe not this young!

Alyssa is moving an hour away.  While I was packing up for her, I found a notebook she had made for Jon of all the letters she wrote since she was a young girl to her future husband.  Cassi told me she has been writing letters to her future husband for many years also.
It has given them a vision of what they want in a husband.   It motivates them to become the kind of woman the man they are waiting for will want to marry.  They started praying for protection over their husbands many years ago and asking God to guide and lead them.  What a priceless gift that is for these men!
I never thought of doing that when I was young.  I just lived for the moment...short term gain for long term pain.  I wanted to experience romance NOW...starting at 16 years old.  I had no capacity to think about waiting for the right one or even thinking that far into the future.  My girls did...They knew that God gives you the desires of your heart, so they were/are willing to wait for the husbands that God has picked out for them.
Alyssa has found the husband God has picked out for her.  They are perfect for each other.  God keeps His promises.  She always knew He was preparing the perfect one just for her, so she patiently waited  many years.  God is so good.
Jon, ironically, meets everything she wanted in a husband, except he is the baby of the family and she requested a middle child!  Since she is the first born, she thought she'd run over a baby...until she met Jon.  She doesn't want to run over him.  (He wouldn't let her!)  She lets him lead.
Teach your children the ways of God.  He knows everything...the past, the present, and the future.  He does such a better job picking out your spouse than you do.  Surrender your plans to Him... Now unto him that is able to do exceeding abundantly above all that we ask or think , according to the power that works in us.  {Ephesians 3:20}  WOW!!!  What a God we serve.