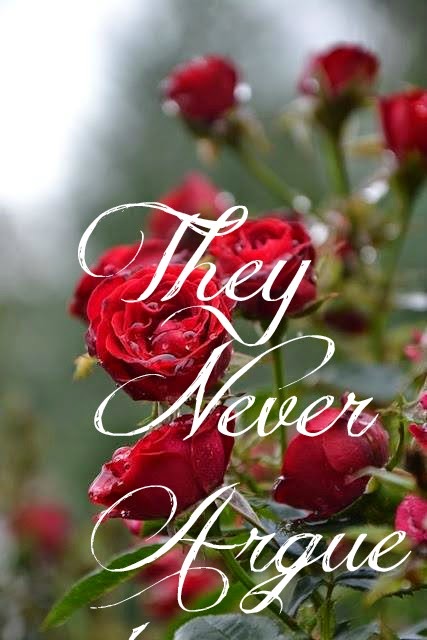 My whole college gang reunited for a wedding in Pasadena this past weekend. It was the first time we have all been together for many years. My best friend, Sandy, was among the group.  I asked her if she ever argues with her husband. She looked at her husband, Peter, and said, "We have never argued! We discuss things but we don't argue."

She then told me that if they are discussing something and she feels that Peter is wrong, she just lets it go because she said it is no big deal to her. She doesn't insist on being understood or being right.

They have a wonderful marriage. They are very happy together. You can tell she respects him by her body language towards him. She smiles at him frequently. She looks into his eyes when he talks. She never interrupts him when he is speaking. She gives him honor.

Sandy is looking really good. I told Peter this and he told me Sandy takes care of herself.  he exercises a lot and doesn't eat too much. He told me there aren't too many hot 54 year old women around but he thinks she is one hot babe!

Sandy knows how to do marriage. She models it to anyone that watches. I had another college friend who told me not arguing just comes naturally to Sandy but not to her. I told her if I gave her a ton of money to stop arguing, she would stop. She told me that would give her the motivation she needed to not argue.

God's Word should give you the motivation to not argue. It tells us over and over again that arguing and strife should not have any part of us. We should be at peace with all men, including our husbands. I told her it took me awhile to stop arguing all the time. I had to bite my tongue a lot. She told me my tongue must have been quite bloody!

So I figure if Sandy and Peter can go their whole marriage without arguing so can I and so can you. Let your husband have the last word and be wrong. So what! You have pleased your husband, retained peace in your marriage, and pleased the Lord. Nothing is better than being at peace with others.

One's desire for one's rights must be put aside, with a recognition that the tearing apart of one's own house with one's bare hands is a ridiculous price to pay to win an argument.
{Edith Schaeffer}

Take my 30 Day Challenge to stop arguing with your husband.
It will change your marriage!!!

Have nothing to do with foolish, ignorant controversies;
you know that they breed quarrels.
And the Lord's servant must not be quarrelsome but kind to everyone...
2 Timothy 2:23,24

Here are 186 verses concerning strife.  Study and meditate upon them if you struggle with arguing with your husband and see how strife is far from the heart of God.