"Everybody" is Talking About Brad and Angelina 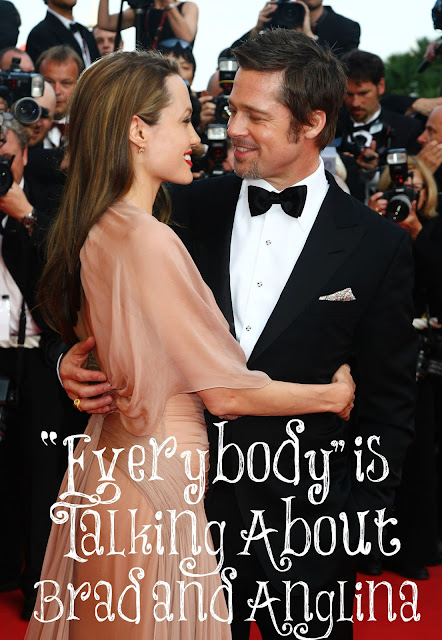 If you haven't heard the news and aren't up on pop culture like most people are, Brad and Angelina are getting a divorce. (They are famous movie stars for those who have no idea. I actually can't remember ever seeing a movie either of them are in.) They lived together for ten years and then decided to get married in August of 2014. Now, only two years later, they are getting a divorce according to this article. You would have thought with ten years of experience living together, they would have known for sure that they were perfect for each other and this is why they married.

Culture no longer understands the definition of marriage and puts little value on it. Marriage was created by God and it is the union between a male and a female for life, until death do they part. The marriage bed is to be kept undefiled so this means there is to be no sexual relationships before marriage or after marriage with anybody other than their spouse. (Yes, I know the majority of Hollywood could care less about God and His ways. However, He is still their Creator and they will suffer the consequences of disobeying His ways.)

The sad part is that many Christian couples look no different than Hollywood couples. They live (have sex) with each other and try it out before committing to marriage believing that this will better help them to decide if marriage is right for them. Many chose never to marry and most go separate ways after a while which is similar in feeling to a divorce. They are learning from Hollywood instead of from God's Word.

Too few women have wisdom today. They misunderstand men. Godly men marry so they can have sex and have it freely. They wait to find a godly woman who wants a godly man to commit their lives to each other. Women who aren't godly give themselves away for free. They place no value on themselves or the men they live with. Sex is cheap for them and commitment is old-fashioned and not worth waiting for. They have missed out on the beauty of marriage the way God created it from the beginning of time.

Women, if you aren't teaching your children about the Lord and His ways consistently, your children will grow up to act more like unbelievers than believers. Our nation idolizes Hollywood. Hollywood is constantly having award nights to acknowledge and fawn over each other. (We never watch them since we have no idea what any of the movies are and few of the actors and actresses, plus the women flaunt their immodesty by the dresses they wear.)

I just finished reading and studying 1 John. It's all about love and how Christians should be walking in love and known for their love towards others. If you don't love, you aren't His child. Interestingly, the last verse states, "Little children, keep yourselves from idols." Now, this seems like it was quickly thrown in there since the rest of the chapter is talking about love. However, idols keep us from loving and living as we should. God should be the only one we serve because He is the beginning and definition of love. God is love.

If you serve and idolize Hollywood, you won't love as you are commanded to love. Love does another no harm. Cheating on a spouse, having sex before marriage, being involved in porn, living together before marriage, and all the other sexual sins have nothing to do with love. They only have to do with self and idolizing something other than the Lord. If you truly love, you will do nothing to harm anyone else, including your future spouse if you aren't married, your spouse if you are, and your children from divorce. This means you won't commit fornication, adultery, or be involved in any type of sexual immorality with anyone else ever because of the harm it does to everyone involved. This is why God commands us to flee it.

Make the Lord the only "idol" in your life. Serve Him and obey Him. He tells us to believe on Him and love others. Do nothing from selfishness or empty conceit, but with humility of mind regard one another as more important than yourselves, including your future husband or your present one.

And this is His commandment. That we should believe on the name of His Son Jesus Christ, and love one another, as He gave us commandment.
1 John 3:23
photo source