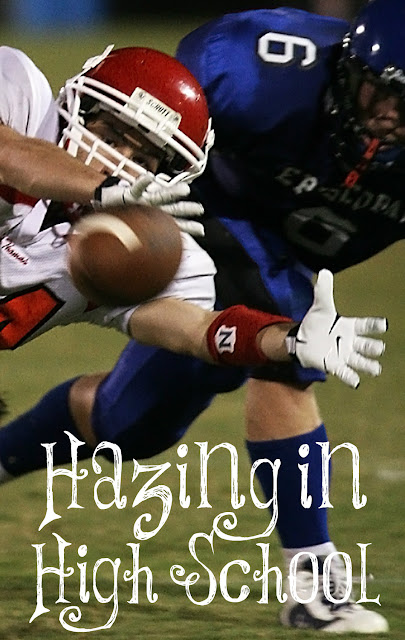 Recently, I heard a sportscaster talk on the Sports Channel about a news special happening that night on hazing in the high schools so I watched the preview. It was about a freshmen boy who played football. One day, he was in the bathroom and two big football players came from behind him, tackled him, and sodomized him. Broken and with tears streaming down his face, he said, “They took away my manhood.” The man interviewing the boy said this is happening all over the country. Being sexually molested is not happening by family members as much as it by children’s own peers these days.

“Forty-eight percent of all students who join any group in high school are subjected to hazing. Forty-three percent of them reported being subjected to humiliating activities, 23 percent are involved in substance abuse, and 29 percent of them told us they performed potentially illegal acts as part of their initiation,” said Dr. Nadine Hoover, principal investigator.

“The prevalence of hazing in high school should be a serious concern to all of us in higher education," said Charles M. Edmonson, president of Alfred University. “Colleges and universities have long considered hazing to be a problem, and they have worked hard to prevent it. This study reveals that our challenge is much greater than anyone appreciated.” (source)

In another story, Juliet Macur wrote, "I came to Chester County to inquire about 'No Gay Thursdays,' the term the district attorney says players use for hazing. One Thursday in October, the prosecutor said, a freshmen was held down and assaulted with a broomstick as seniors poked him between the legs with it, eventually penetrating him while teammates looked on.

Why so many? Susan Lipkins, a psychologist and an expert on hazing, said it was happening because hazing is a sports tradition that has endured for generations, and coaches and administrators often let it happen. The adults in the room - well, they leave the room and let the mayhem ensue."

The days are evil, women. You are the ones the Lord has called to protect your children. With pornography rampant, you can’t be too cautious about where you send your children and with whom you allow them to be with. I remember being afraid of going into the bathrooms in high school back in the seventies because they were filled with girls who were smoking and were usually mean. I can’t even imagine what it is like today! Yes, they will begin making more rules against initiating and hazing practices, but so few children are been trained and raised by their mothers anymore that the rules won’t matter much. In their minds, they have been taught “if it feels good then do it.”

Dennis Prager wrote, "In a New York Times op-ed column, a professor of philosophy noted his shock at learning that most young Americans do not believe that moral truths exist. They are incapable of asserting that anything, including killing for fun, is wrong beyond personal opinion." Few are being raised with any biblical morals and principles anymore to respect and obey authorities and to do what is right and good.

The mother cannot tell what her tender little infant may grow up to be—tall or short, weak or strong, wise or foolish—he may be any of these things or not—it is all uncertain. But one thing the mother can say with certainty: he will have a corrupt and sinful heart. It is natural for us to do wrong. "Folly," says Solomon, "is bound up in the heart of a child" (Proverbs 22:15). "A child left to himself disgraces his mother" (Proverbs 29:15). Our hearts are like the earth on which we walk; leave it alone, and it is sure to bear weeds. (J. C. Ryle)

We must not depend solely about the government or school authorities to protect us and our children. We are their guardians and have been given this job from the Lord. No matter how well this boy was trained to not let anyone touch him and to protect himself, he couldn’t have protected himself from two boys that were bigger and stronger than him. It’s not going to get better. It’s only going to get worse and this is why I am a homeschooling advocate. There’s no safer place for your children to be than in your home with you full time and being trained and disciplined by their mother. If their father is around and involved in their lives, this is even much better since fathers have a huge influence upon their lives.

If you aren’t married, marry a godly man who you can tell has deep roots in the Lord and walks faithfully with Him. Teach your children to marry godly spouses. It’s time to take control of your children, mothers. Our culture is deeply depraved and they aren’t going to teach your children anything good but you can. With a lot of prayer and wisdom, you will be able to raise your children in the nurture and the admonition of the Lord.

Redeeming the time, because the days are evil.
Ephesians 5:16