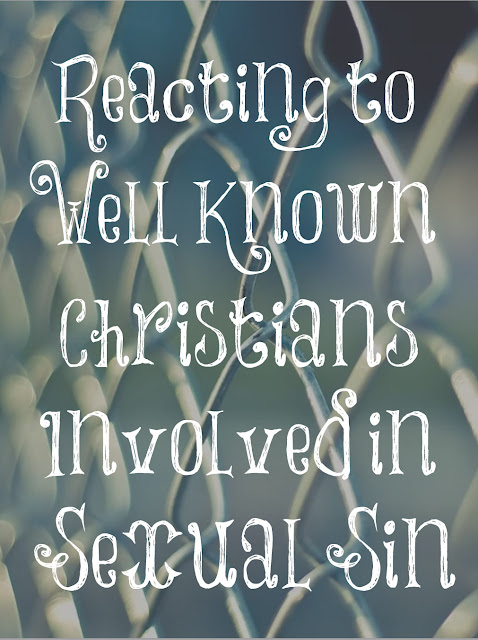 Joshua Duggar comes from a godly, wholesome family, yet he was caught being deeply involved in fornication. Then we find that the father of the Willis family (twelve beautiful and talented children that are homeschooled and perform around the world) has been arrested for molesting his own daughters. Someone wrote this comment on my blog recently:

"And the Willis family! The husband was just arrested for SEXUALLY molesting his own daughters. I'm glad I don't follow these 'people.' I do not like the Duggars and never watched the Willis family. People are so quick to watch a 'Christian' family, because they claim to be. I'm glad I have discernment!"

Yes, everyone has their opinions but what should our reactions be when we hear of a Christian being caught in a sinful lifestyle that blasphemes the name of the God they serve? We grieve for them, for their family, and for the black eye they give Christianity, then we pray for them and their families. We don’t mock them or join the culture in tearing them apart. We live in a highly sexualized culture, and Satan is on the prowl looking for whom he may devour.

Probably most of you have heard of well-known pastors getting caught for being involved in fornication. Yes, it’s painful and awful. We never would celebrate it and make it a cause for bragging like this woman who made a comment on the Willis family. It should grieve us like it grieves the Father; for He wants all to repent and walk in the Spirit.

We are commanded to "exhort one another daily, while it is called To day; lest any of you be hardened through the deceitfulness of sin" (Hebrews 3:13). If you see a brother or sister heading in the wrong direction, say something! Exhort them to walk in obedience. Exhort means to “strongly encourage or urge (someone) to do something.” Encourage others to walk faithfully with the Lord, be in the Word, and be transformed by it and not by the world.

This is why I exhort women to be keepers at home, so they can be the ones raising and watching carefully over their children's behavior and thinking. They need to be taught to take every thought captive to the obedience of Christ and flee fornication (1 Corinthians 6:18). Continually warn them about the evil of our culture. Yes, we should be sheltering our children when they are young so when they are grown up, their roots will be deep and strong in the Lord. They will clearly know His ways and have hidden His word in their hearts, so they won’t sin against Him.

Joshua Duggar and Toby Willis gave into a small temptation; drawn away by their own lusts, enticed, and then acted upon their lusts and brought forth sin. "But every man is tempted, when he is drawn away of his own lust, and enticed. Then when lust hath conceived, it brings forth sin: and sin, when it is finished, brings forth death" (James 1:14, 15). They didn't "fall into sin." They chose it, but it doesn’t mean all Christians will chose to sin in such a way.
There are many who have lived godly, influential lives and continued to walk on the narrow road until the day they died. Do not lose heart! Stay in the Word and make sure your children know it. Live out love and kindness to your husband, children, and all those you know. Allow the Lord to use you as His instrument to a fallen world and stay strong in Him and His mighty power.

Finally, my brethren, be strong in the Lord, and in the power of his might. Put on the whole armor of God, that ye may be able to stand against the wiles of the devil.
Ephesians 6:10, 11