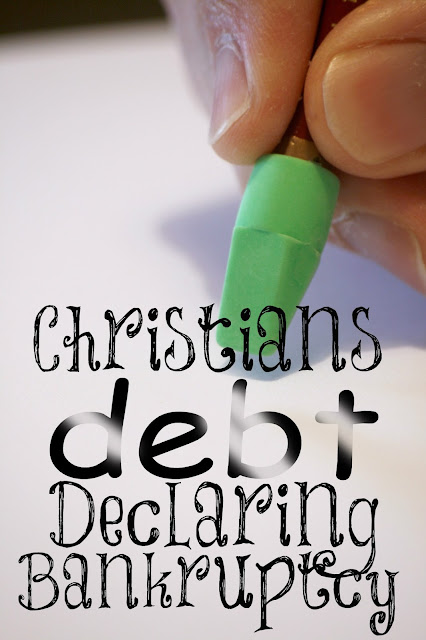 Should Christians be declaring bankruptcy?  I do not believe they should.  Psalm 37:21 says, The wicked borrow and do not repay, but the righteous give generously.  The Bible also says, Owe no man anything, but to love one another: for he that loves another has fulfilled the law. (Romans 13:8)

The reason there is so much bankruptcy today is because people want what they want when they want. They no longer want to save up their money and wait patiently until they have enough to buy something. They just whip out their credit card and buy what they want.

Then when they can no longer pay their bills, they declare bankruptcy and expect others to pay off their debt. This is not the way Christians should be living. We should be living within our means and only buying what we can afford.

I was raised to always live below what you earn so you can save. We have always lived that way. We bought everything with cash except our homes which we paid off as soon as we could. The rich ruleth over the poor, and the borrower is servant to the lender. (Proverbs 22:7) I don't want to be a slave to anyone if I can help it!

Laine was one of my first mentors.  Her husband never made over $30,000 a year yet they have paid off their home in San Diego.  She was a full-time mother with five children and never worked outside of her home but she sure works hard inside of it.

Here are her thoughts on bankruptcy ~

Bankruptcy. It is a word now that Christians are not ashamed to utter. Along with non-Christians we have bought into this world's lies that we must have what we want when we want it at another's expense. No restraint whatsoever. Even though we may not believe that when we are charging and borrowing, it is so when we no longer consider paying it back. Years ago our great grandparents would have never considered bankruptcy. They would rather have sold everything they had than to bring this word on their good name.

Teach your children to be content with what they have and to live below their means.  For godliness with contentment is great gain. (I Timothy 6:6)

A very good book to learn to live within your means is
The Complete Tightwad Gazette.

Posted by Always Learning at 1:00 PM