Walk in the Ancient Paths 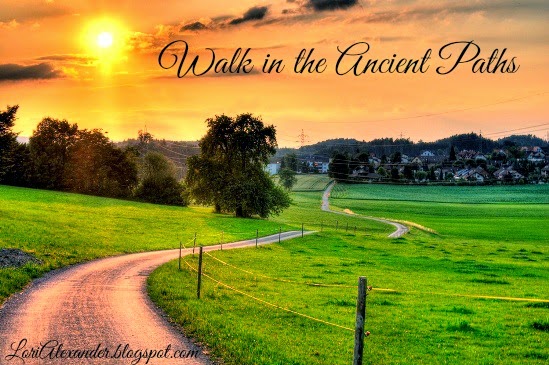 Our Grandmothers, those who lived during the Great Depression era, were never ever asked what they did for a living. A woman's job was her home; where she cooked, cleaned, and raised a family. The majority of them were very content making a house into a home because they knew they were right where they were suppose to be.

They spent their time wisely since they didn't have computers and iPhones distracting them. They raised their children to be obedient and respectful of elders. They gave them a good spanking on their bottoms if they misbehaved. They had time to teach them morals and values since they were home all day with them.

If their husband couldn't find work or didn't make much money, they weren't expected to go out and get a job. The family, church and community would all pitch in and help. They would live on less and make due with what they had. They could care less about keeping up with the Jones' since there were no Jones'. They were content with simple furnishings and were probably very thankful for the roof over their heads and food in their bellies.

Men were the providers and protectors, while women took care of the home and family. There was no blurring of lines. They each knew what was expected of them. Their vows meant something. When they promised to love their husbands until death do us part, they kept their vow. They didn't expect romance and a lot from their husbands since they were working hard to provide a living.

They didn't think about "me time." They knew their time was to be spent serving their families; keeping them well fed with clothes on their backs. The majority of them knew there was a God and the Judeo-Christian values that this nation were built upon. They were thankful for the freedom to live in this great land.

A young woman asked me the other day if she should marry a godly man who wants her to work outside the home. He isn't interested in her being a homemaker full-time. I wouldn't have dreamed of marrying Ken if he felt this way since this is all I wanted to do since I was a little girl. So many women write me and tell me how much they want to be home full-time but their husbands don't want them to be. It is a very sad state we are in.

Thus says the LORD,
"Stand by the ways and see and ask for the ancient paths,
Where the good way is, and walk in it;
And you will find rest for your souls.
Jeremiah 6:16