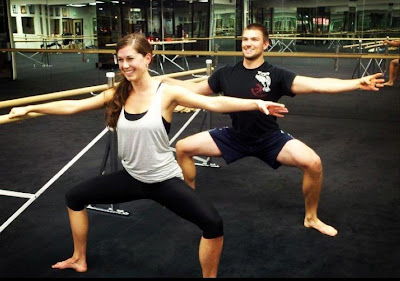 My mom and dad are completely opposite.  She was one of seven children.  He was an only child.  She prefers being with people.  He prefers doing his projects.  She raised us eating organic food and never wanting to go to doctors or use drugs.  He was a doctor.  She is a spender and he is a saver.  There weren't many things they enjoyed doing together, since they were so different.  It was difficult, but they have made it work going on 60 years!

Jon and Alyssa are a lot alike, however.  They enjoy the same things.  They want to do a lot of things together.  They love being together. Sometimes, they will do what the other one wants to do even if it isn't their thing.  Alyssa teaches Cardio Barre.  Jon went and took a class from her. {As you can see in the above picture.}  Did he like it?  No, but he wants to be a part of her life.  For Thanksgiving, they did a Turkey Trot.  Alyssa isn't a runner, but she wanted to do it because Jon was doing it. 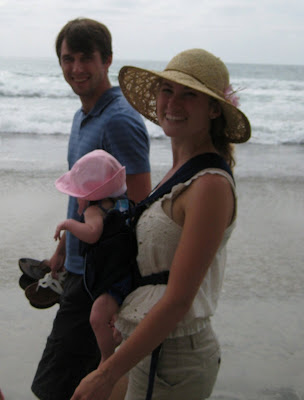 Ryan and Erin enjoy a lot of the same things also.  They are similar in personalities.  Erin loves to walk on the beach, so Ryan walks with her.  Ryan loves to watch football, so Erin watches football with him.  They work on fitting into each other's lives.

I see a lot of couples living separate lives.  We use to but as Ken and I have gotten older, we do a lot more things together.  {He enjoys being with me a lot more now also since we no longer argue!}

So my advice to young women is to find a man that has a lot of your same interests and you enjoy doing the same things.  It seems to make marriage that much easier.

If you are already married, find things you enjoy doing together.  If that is almost impossible, love and serve each other anyways.  The only command the Bible has in choosing a spouse is to marry a believer, so these are just my opinions based on what I have observed in marriages.

Fulfill ye my joy, that ye be likeminded, having the same love, being of one accord, of one mind.
Philippians 2:2