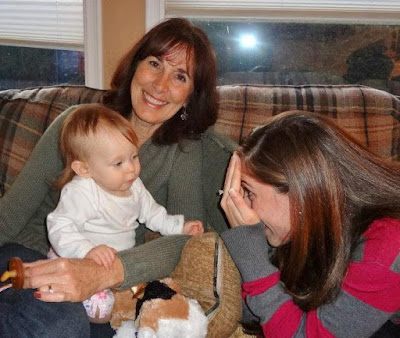 Twenty years of being extremely ill was very difficult.  Many of you have asked what was wrong with me so I thought I would tell the whole story for those who are interested.

When I was a teenager, I did a back handspring and landed on my head.  I felt a pop in my neck and was sore afterwards for awhile, but I was okay.  At 18 years old, I  ran as fast as I could into a plate glass window.  It was cold outside and I didn't know the sliding glass door had been closed.  I broke my nose in three places and had to have surgery.  When I was 30, I was smashed between two semi-trucks with double whiplash and a broken tailbone.  So those were a few of my injuries that, I believe, caused all of my illnesses.

After Cassi was born and after my car accident, I started feeling terrible.  My stomach always killed me and I was always nauseous and had diarrhea often.  I went to many doctors and specialist, had many tests performed, and was told that it was all in my head.  This went on for two years.

One night I was very sick so I went to a doctor near my home.  He asked if I'd ever had a stool test.  I hadn't so I took one and they found that I was LOADED with parasites.  That began a five year journey on trying many drugs and then enzymes and vitamins to get rid of them.

My stomach never got much better. One day about eight years ago, I woke up with a terrible headache.  I had been having on and off head and neck pain since I was a teenager.  I went to physical therapists and chiropractors, but nothing helped.

Six months later, I woke up severely nauseous.  Two days later, when I hadn't slept in two days and didn't have one moment of relief from the nausea, I asked Ken to take me to the emergency room.  By the time we got there, I couldn't even walk.  The ER doctor was preparing to take a Cat scan of my body and I asked him to take one of my head also since I had so many headaches.

That is when they found I had a tumor in my pituitary region which is in the brain.  They also found that my sodium levels were 115 when they were suppose to be 134 to 145.  115 is death level.  My pituitary tumor had completely shut down my kidneys ability to retain sodium.

All this was a puzzle to the doctors at the beginning.  It took awhile to figure it out.  They first thought I had a pituitary tumor which shouldn't make me as sick as I was but after brain surgery, the neurosurgeon came to me in the recovery room, knelt by my bedside and said to me, "Now I know why you were so sick.  You had a meningioma that completely smashed down your pituitary.  The tumor was much larger than we thought but as I went to cut it out, I found there was no beginning and no end.  It just fell out."

Anyways, it took several years to recover from all of that but I still had headaches and backaches all the time.  Three and a half years ago, I woke up one day,  could hardly walk and had burning pain throughout my body. We immediately went in for an MRI to make sure my tumor hadn't grown back.  Nope, it hadn't.

So they took an MRI of my neck and found that my C3 disc was pushing into my spinal cord.  I had to have my neck fused by another neurosurgeon.  Nine months after that surgery, I was still in tremendous pain.

I found a website about icing and wiggling, so I started icing and wiggling my neck constantly for one month and finally started feeling better.  So two years ago from this upcoming February, I finally got out of bed and have started enjoying life. Just in time to see Ryan get married, have a baby, and Alyssa get married!

I still have to be very careful with my neck.  I can't lift heavy things or I suffer, but overall I am so much better that I have been in many years.  In fact, my children didn't even know my true personality until I got better.  They didn't know I was a happy, talkative person like I am today!  All they knew was a mother in a lot of pain...But God is so good.  He has definitely restored the years that the locusts have eaten.

The LORD will sustain him on his sickbed and restore him.
Proverbs 41:3