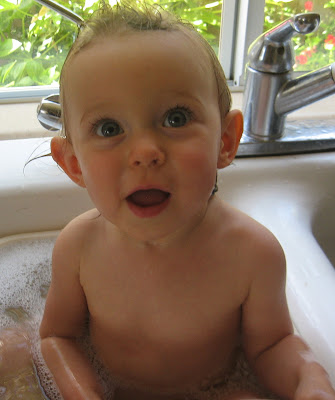 There were few diversions for children in the early twentieth century, and one gets the distinct impression that they were happier because of it.
{Elizabeth Elliott}

We had television when I was young, but that was it.  There were no computers, iPads, cell phones, DVDs, or video games.  Television got boring after awhile so we spent most of our time outside swimming, making up games, having a neighborhood Good News club, playing school, riding bikes, etc.  Our activities caused us to be involved with other people, real live people.

Children don't seem to be doing this anymore.  All of this new technology has taken them away from reality and imagination and put them into continual entertainment mode.  There is little time to be still and hear that still small Voice.

Our enemy must love this.  It is causing a generation of overweight and lazy children.  I know there are many of you have children who work hard and don't sit around expecting to be entertained all day but you, I think, are the exception.

Children need to be bored.  They need to learn to use their imaginations and be creative.  They need to be taught to work hard and not expect hand outs.  We need to be protecting them from all of these diversions which can lead them away from godliness and hard work.

They also need fresh air and exercise.  They need to keep their minds active through reading and playing outside.  They also need to have healthy interaction with others face-to-face.

Don't let this new technological age steal the minds and hearts of your children.  Watch over them carefully and protect them.  They may thank you for it someday.

She looks well to the ways of her household.
Proverbs 31:7