Women are to Be Discreet 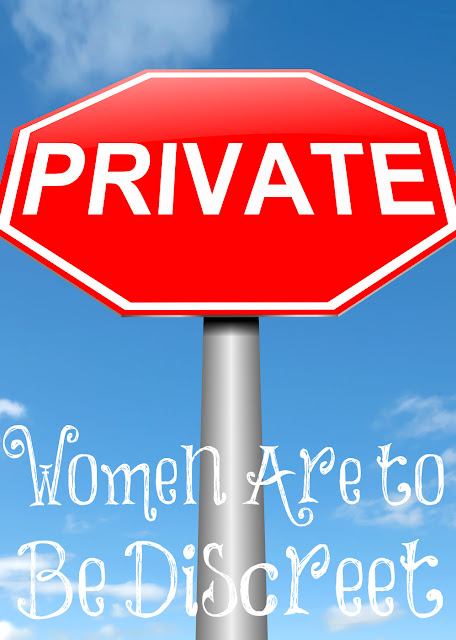 Most young women are not discreet today. Each generation seems to becoming more and more indiscreet, yet the Lord commands that I teach young women to be discreet. I asked the women in the chat room, "What is something you would never do in front of your husband? There are some things that should be done in private." There should be some feminine mystery about us, especially towards our husbands. We should be known for being discreet and feminine.

Some of the young women bragged that they can do everything in front of their husbands. I have noticed that there is no sense of shame in the younger generations and I don't blame them. I blame the culture they are being raised in and the lack of older women teaching them about discretion.

The definition of discreet is "judicious in one's conduct or speech, especially with regard to respecting privacy or maintaining silence about something of a delicate nature; prudent; circumspect." Just because we are married doesn't mean we leave discretion at the door.

Some women were even bragging about their husbands wanting them to pass gas in front of them! Unfortunately, too many men are being raised by feminists mothers, therefore, they don't realize how attractive femininity is on their wives.

A woman shouldn't go to the bathroom in front of her husband. She shouldn't do anything where she can't sit in a feminine way in front of him. If you have to pump your breasts, do it in private. Floss your teeth without him having to watch. Whatever isn't feminine, don't do in front of him. Be women of discretion, especially in front of your husband. A lack of discretion turns most men off. They like their wives to be feminine and discreet. It is the opposite of them and this is what attracts men to women.

I want my husband to think of me as feminine, even in the way I eat my food. Do you gulp your food down in an unfeminine way? I have seen women do this and it is not appealing at all. Do you eat way too much and stuff yourself? This is unattractive as well. I knew a woman who would lick her fingers and use them to pick up all the crumbs on her plate to eat them! Eat like a lady!

Our goal is not to be sexy but discreet and modest. We are not trying to gain the attention of the men around us. We only do this behind closed doors with our husbands. God calls us to be women of discretion and I don't think he meant for us to stop doing this with our husbands.

Work on becoming a classy woman. I have an older woman friend who mentors young women and she is the classiest woman I know. She buys all of her clothes at thrift stores or on sale for very little but she always looks great! She uses discretion in everything she does, even the way she eats.

Most young women scoff at this today but if you are a young woman who desires to become a godly women, I encourage you to not scoff at this but learn to be discreet in all you do, especially with what you say. Never use foul language. Don't gossip and say mean things about others. Let the law of kindness always be on your lips. This is part of being discreet and feminine as well.

We are not part of this world. We are strangers and aliens and we should look like it. Too many Christians have fallen into the gutter with the rest of the world instead of rising up and being salt and light. Be a godly woman of discretion; for this pleases the Lord.

As a jewel of gold in a swine's snout,
so is a fair woman which is without discretion.
Proverbs 11:22