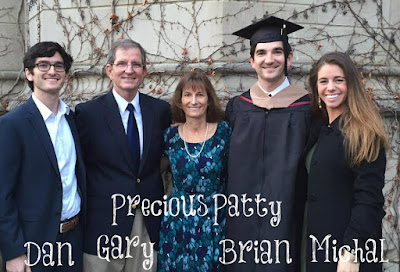 My college friends were here for Alyssa's wedding and they wanted to know what happened to Patty who was at the wedding. Her fingers are gone from the knuckles up and her legs are cut off above her knees. She has had skin grafts on her entire body, but I would have to say she is the most amazing woman of God that I know. We have been friends for many years and I got to know her soon after her illness. Here is her story ~

Her husband of 30 years and two sons went to a hockey game many years ago. I want to guess about 15 years ago {it's been 22 years now}. Patty was very tired and went to bed early. She got up to go to the bathroom a while later and noticed her arms were completely bruised.

She went to the phone to dial 911 but never made it. On the way home from the game, Gary wanted to stop at In-N-Out {a famous fast food burger place out here} on a Saturday night around 10:00 p.m. but it was closed. God must have closed it because if Gary had gotten home any later, Patty would have died. {It's never closed this early on a Saturday night.}

She was laying on the floor in a lot of pain. He rushed her to the emergency room and there happened to be a doctor on call who had just studied at the disease she was suffering from and started pumping her body with fluids. She was diagnosed with Meningococcal Septicemia. Her blood pressure was 40/20 and her husband was told she only had twenty minutes to live. Most people who have gotten this disease have either died or lost a lot of functioning of their internal organs but Patty's are fine, praise the Lord. All the capillaries under her skin had broken open.

She had to spend months in the hospital and they had to keep slowly cutting more of her fingers and legs off to prevent the disease from killing her. Every time they did this, they had to get permission from Gary. You can imagine the pain and suffering he was having to go through during this tragic process. Her sons were only four and six years old at the time. Once she was released from the hospital, she lived in a wheelchair for many years. Several years ago, the city raised enough money for her to get legs so now she is able to stand up and go a lot more places.

She had breast cancer a few years ago. I think she still has phantom pain in her legs. She never complains about anything. She is one of the most joyful women I know. Her older son, Brian, works for the airlines so Gary and she have flown all over the world. She especially has a heart for the Jewish people and has even gone to Israel a few times. Her husband and sons adore her. She loves Jesus with her whole heart, soul, and mind and it is definitely His strength that has pulled her through.

All through my trials and sufferings, she has held me up in prayer and when I have a problem, she is one of the first ones I call. She is a prayer warrior and believes strongly in the power of prayer. She is a living example of God working through her. She is joyful, loving and giving. I am so happy to call her my friend. I love her very much and I am so happy the Lord spared her life.

And we know that all things work together for good to them that love God, to them who are the called according to his purpose.
Romans 8:28

Posted by Always Learning at 4:35 AM