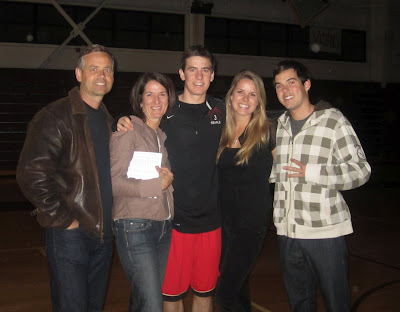 Bradley, my nephew, LOVES basketball!  Steven, my son, had a fairly successful high school basketball experience.  He started as the point guard on the varsity team his freshmen year.  He played almost every minute all four years.  His senior year, his team went to the state championship game at Arco Stadium in Sacramento.

Bradley is a few years younger than Steven.  He went to almost all of Steven's home games and even some of his away games.  He was Steven's number one fan!  He and his family drove all the way to Sacramento to see Steven play.

He was very disciplined and worked out hard doing many push-ups and sit-ups every day.  He wanted to play high school basketball so badly.  He shot a ton of baskets daily getting prepared for it. When he finally got to high school, he didn't play much.  It broke my sister's heart. {Ken did remind me that he was the best three point shooter on the team!}

I couldn't go to many games, because of my neck fusion and the pain it caused.  I did go to several, however.  Bradley was the biggest cheerleader on that team.  He would stand up during the game cheering the players on.  As soon as they came back to the bench, he would  be the first one up patting the guys on the back and encouraging them.

He got to play some and when he did, my sisters would cheer him on loudly.  They knew he loved to play and he was a good player.  He received the Eagle Award his senior year.  That goes to the player who showed the most integrity on the team.

Dennis Prager says that the losing team always is learning more than the winning team.  Bradley learned a lot more through his disappointment, than Steven did through his success.

He learned that life isn't fair.

He learned that you don't always get what you want, even if you work really hard.

He learned to keep a good attitude, even when he was so disappointed.

He learned to cheer others on, even when he wanted to be playing so badly.

He learned to rejoice with those who rejoice, even if he didn't feel like it.

Bradley has turned into an incredible, young man.  He is a man of integrity.  Not living his dream has been okay.  Yes, it was hard but in the scope of life, it wasn't all that important.  Pleasing the Lord in all things is a much more important lesson and Bradley learned that well.

Consider it pure joy, my brothers, whenever you face trials of many kinds, because you know that the testing of your faith develops perseverance. Perseverance must finish its work so that you may be mature and complete, not lacking anything.
James 1:2-4

A good name is rather to be chosen than great riches, and loving favor than silver or gold.
Proverbs 22:1

P.S.  I shared this with my parents the other day.  They were both weeping when I finished.  My mom said, "I feel so badly for Bradley."  My dad said, "I would rather him get the Eagle Award and walk with Jesus than be the first round draft pick in the NBA."  The precious love of grandparents for their grandchildren!