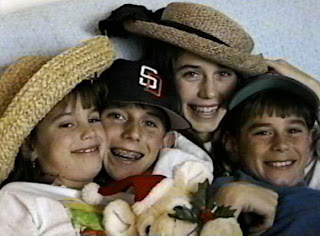 A young mother asked me to be more specific when and in what situations we spanked our children when they were young.  As you know, I flicked their cheek once when they were nursing and bit me.  It stopped them from biting immediately.

When they started to crawl and would start to stick their fingers in a light socket, we would say "no" and swat their hand.  After that, we would only have to say "no" and they wouldn't touch things we didn't want them to touch.

One time when Ryan was four and Steven was two, Ryan pushed Steven down so he fell on his bottom.  Ken had Ryan come over and pushed Ryan down on his bottom.  He asked Ryan how he liked that and Ryan said he didn't like it, so he never did it again.  Each of them only had one tantrum.  We nipped that in the bud right away.

Ken was always telling the children that Alexanders' love each other.  Our children rarely argued.  We wouldn't put up with it.  We never spanked them after they were five years old.  I don't think any of them ever remember being spanked.  It was very rare.  They were quick learners.

The key is to be consistent and follow through.  After we spanked them,  we would cuddle with them and talk to them about why we spanked them.  They always loved the making up part!

It isn't easy to discipline your children.  It is hard actually, because you love them so much.  But we didn't want brats.  We wanted to be able to take our children places and have others enjoy them.

None of them ever got in trouble at school or with anyone in authority.  Even the coaches in high school and college loved them.  They respected authority, even those coaches and ballet teachers that were really tough.  They never talked back to them, even when they were being treated unfairly.  They knew life wasn't fair.  Ken taught them that, so they learned to live with that.

I love my children.  God blessed me so much.  Take good care of those blessings from God.  Oh, and I also had them memorize a ton of Scripture growing up.  I wanted God's Word hidden in their hearts, so they wouldn't sin against Him.

Raising children takes a lot of hard work and time.  This is why I am so passionate about mothers being home full time with them.  It is so worth it to have great children turn into great adults.

Whoever spares the rod hates his son, but he who loves him is diligent to discipline him.
Proverbs 13:24

Folly is bound up in the heart of a child, but the rod of discipline drives it far from him.
Proverbs 22:15

P.S.  From now on, I am going to be deleting comments that aren't thoughtful disagreements, questions, or comments on the specific post.  If you take things out of context, misconstrue my words, or tell me I abused my children or that I encourage women to stay in abusive situations, which is completely false, I will delete your comment.  Not one of my children would say they were abused in any way.  They all enjoyed childhood.  The only thing they said I could have changed was to let them eat more candy!

Posted by Always Learning at 5:00 PM