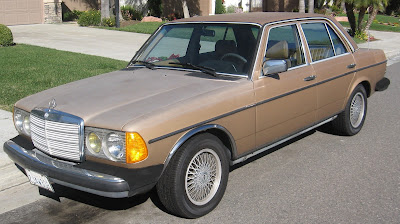 Yes, isn't it beautiful!  It is over 28 years old and has over 300,000 miles with the same engine it was born with.  {The picture actually makes it look better than it looks in real life.  The paint is all worn off and the seats are torn.}  My mom drove it for many years and then she gave it to us.  Both my boys learned how to drive in this car and drove it for the first two years after getting their driver's licenses.
It can go from zero to 35 miles per hour in 15 minutes flat!  They NEVER got a ticket driving that thing.  It is a diesel and you usually have to drive it in the slow lane on the freeway, because it can't drive above 55 miles per hour.
It is a GREAT car for young boys to start off with.  They never got in trouble.  They went to a high school that had a lot of wealthy families in it.  We liked them driving that car.  We wanted them to not care about keeping up with the Jones' and material wealth.  We wanted them to not mind having old, used things.
Their worth came from Christ and Christ alone.  They were taught they were worthy because of Him.  He calls them His sons and daughters.
I asked Ken several months ago if we could get rid of it.  We share one car.  We both work out of the home.  I am a homemaker and he is a management consultant.  We really only need one car.  This car is an eye sore.  It is hardly ever used.
I don't like clutter so I asked him if we could sell it.  He said he didn't want to because people borrow it and we need it sometimes when one of us is using our good car.  I wanted to argue with him.  Then I remembered I am suppose to be submissive and obey him.  We kept the car.
Well, wouldn't you know it, in the last month I have driven it at least six times!  He needed our car for business and I needed a car for mentoring.  Ryan is using it now, because his car is broken.  I am so happy I listened to him.  Even if he turned out to be wrong, I would still be right for obeying God and Ken.  Pleasing God is all that really matters.
For this is the love of God, that we keep his commandments: and his commandments are not grievous.
I John 5:3