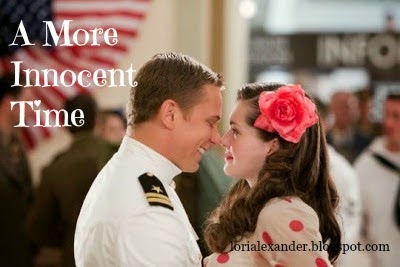 The Lost Valentine was on Hallmark. It is a movie I highly recommend! It is set in a time in our history when sexual immorality was not nearly as common and society wasn't hyper-sexualized like it is today.

Women knew how to be modest. Their dresses covered up their privates instead of accentuating them. They looked and acted very feminine. They mostly wore dresses. Most mothers were at home taking care of their children.

Was it a perfect time?  No. World War II was in full swing. Most young men were fighting Hitler's evil. Many young men sacrificed their lives. It was a very difficult time in our history.

However, I imagine it was a much easier time to remain sexually pure. There was no Internet where you could get pornography at the click of a mouse and no iPhones either.  There were not televisions to watch others having sex and sex selling almost everything, including hamburgers. People just listened to radios and talked to each other.

The music was decent and romantic. No vulgar words. Just simple love songs. Sure, there was evil going on. I am sure there was fornication and adultery and everything else but not to the degree it is today. One never heard of young girls and women being abducted and brutally raped and murdered. Most people didn't even have locks on their doors!

Divorce was rare. Parents stayed together and raised their children. Yes, it is easy to romanticize those days and look back with nostalgia but God has placed us here, in this day, for His purposes. They had their struggles and we have ours but evil is definitely increasing, however, we can still live as godly women instead of following our culture's fashions and behavior.

I just think living in a society that wasn't so sexualized would have been good. Good for marriages. Good for young people. Easier for men. Now, most places they go, they see scantily clad women...the mall, the beach, the theater, etc.  It isn't an easy time to raise sons to be sexually pure but it is possible because, with God, all things are possible. Make it a priority in your life to raise your children in the wisdom and knowledge of God. This is their single greatest protection against the evil age in which we live.

Because of the increase of wickedness,
the love of most will grow cold.
Matthew 24:12