John Wayne Got It 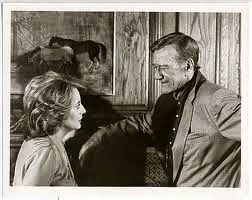 Barbara Walters did an interview with John Wayne three months before he died on February 20, 1979. "He was so masculine and straightforward...," Barbara said.

Barbara ~ "Do you feel that in a relationship the man should be
the boss, the macho..."

Barbara ~ "For the man to go to work and the lady to stay home?"

John ~ nodding his head, "For the man to go to work
and the lady to have her other interests, political, bridge,..."

Barbara ~ "Oh you are going to be in trouble! What if I said to you,
'Duke, you have your little life, play bridge.."

John ~ interrupting her, "Good! I'll go play bridge and
you go do the work. That's fine with me. I love bridge."

Although I don't teach that women should be at home so they can play bridge, he did understand the harm society faced when women left their homes and went into the workforce. He believed it to be "more pleasant for the lady" to be at home instead of away from it. Working full-time and trying to take care of a home and family has caused devastation on the institution of marriage, the family, and society as I have stated many times. It is just refreshing to hear it from a masculine man who didn't care about being politically correct and was around long enough to see the harm feminism had on women and society.

You {Satan} are of your father the devil, and your will is to do your father's desires. He was a murderer from the beginning, and has nothing to do with the truth, because there is no truth in him. When he lies, he speaks out of his own character, for he is a liar and the father of lies.
John 8:44