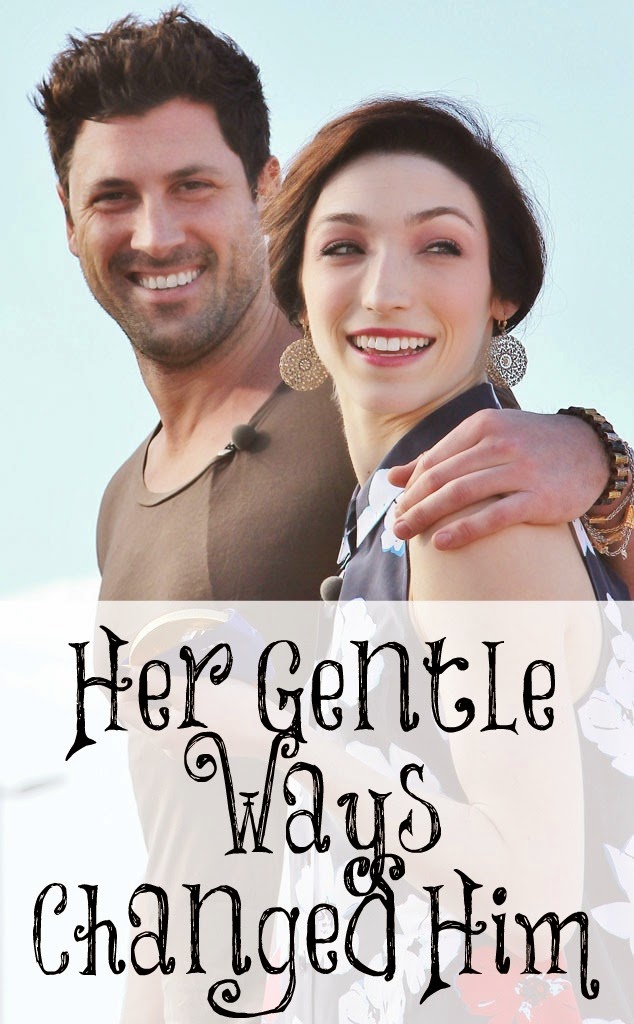 Meryl Davis is an Olympic champion. She is amazing! I loved watching her and Charlie skate at the Olympics. They are a beautiful couple. Last season, Meryl was on Dancing with the Stars. I rarely watch the show because I think the clothes the women wear are very immodest and many of the dances are immodest. This is my personal conviction. It may not be yours. I know Christian women who love this show.

The video shows several of the women with their dance partners and how the women fought the men who were their instructors. When it was replayed for the world to see, they were embarrassed about their behavior. It was ugly. Maks has been on DWTS for many years and is known for being arrogant and difficult to work with. Meryl is known for her sweet and gentle spirit. They matched the two of them together.

Even throughout Maks' bad behavior and foul language with Meryl, she was soft and kind to him. She let her thoughts be known but in a sweet and gentle way. I remember an interview during the Olympics with Meryl and Charlie, her skating partner. They were asked if they fought a lot since they have been dancing together since they were young and for many hours each day. They admitted they never fought! I can see why now. Meryl isn't a fighter. She is a peace maker.

Most women when they are being yelled at by their husbands fight back. It is our natural inclination but God tells us to win disobedient husbands "without a word." Meryl won Maks without a word; well, with quiet and softly spoken words and behavior. She didn't fight him or argue with him at all. She knew he was her instructor and her leader so she patiently listened to him and followed him despite his bad behavior. She softened him and he ended up thinking the world of her! Even the judges commented on the effect Meryl had on Maks.

She is an amazing role model for us. I want to be like Meryl. Love turns the other cheek. Love is patient and KIND. Love is not easily offended. Love thinks more highly of others than themselves. Meryl is love. Whatever man wins her heart will have a wonderful and supportive wife. Her behavior defines femininity.

I am mentoring a woman who is in a VERY difficult marriage. I asked her to watch this video and tell me her thoughts. After watching it she wrote back, "Two cannot dance if one does not lead. If you find yourself married to a man who isn't leading, or doesn't seem to be leading the dance the way you perceive he should, you don't lead HIM. It doesn't make for a beautiful dance! Instead, you gently and with great femininity INSPIRE him to lead you in the way that HE was created to lead!" She is a very wise young woman.

If you want to watch the video, I want to warn you that there is some immodest dress and dancing but Meryl's example is POWERFUL. Scroll down and it is just below the title. Let us all strive to have sweet and tender spirits like Meryl. God commands that women have gentle and quiet spirits. This shows the world Jesus. We must use our lives to point others to Jesus, especially husbands that don't know Him.