Should a Mother Lead Devotions? 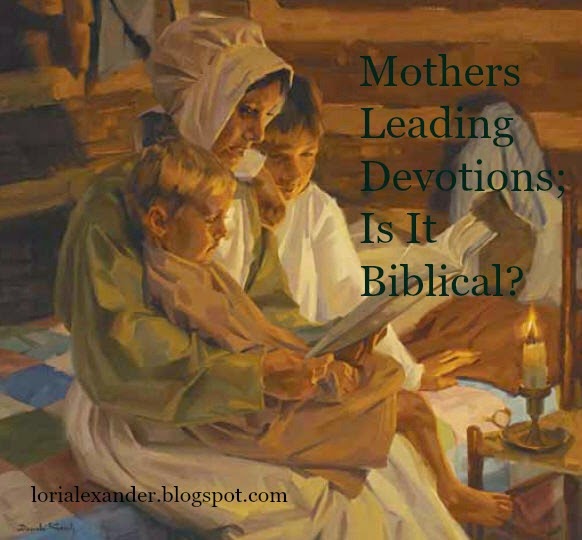 Women ask me if they should lead devotions since their husbands don't seem interested. My reply is always, “Yes!” Paul wrote to Timothy in 2 Timothy 1:5, “When I call to remembrance the genuine faith that is in you, which dwelt first in your grandmother Lois, and your mother Eunice; and I am persuaded that is in you also.” Timothy’s mother and grandmother taught Timothy God’s Word!

Tim Scott was on Focus on the Family this week. He is the first African-American elected in a post-reconstruction South to the Senate; the dream of Dr. Martin Luther King who cared much more about the inside of a person and their character than the color of someone’s skin. Senator Scott said a few things that were very interesting and will be a HUGE encouragement to all single mothers or women who are married to unbelievers.

My mother, once she became a Christian, didn’t encourage faith, she demanded faith and my grandmother prayed for us as well. So, I think I started off with a solid foundation of faith from my grandmother as it says in 2 Timothy, first chapter “Lois and Eunice.” Well, I had Lorita and Francis. So those two women helped me to see the right path.

Tim’s father left the family when he was seven years old. His mother worked full-time as a nurse’s aide and wanted her two sons to understand hard work and not expect hand outs. He also said, “It was a blessing to be raised by my mom, who spent so much time encouraging me with a switch. That could get us in trouble. Well, it can today. It didn’t then and it got me out of trouble, by the way. I always say that the switch is the southern apparatus of encouragement. My mama encouraged me a lot!”

He ended up going through a rebellious period for a few years but spoke these words of encouragement to mothers who have prodigals, “I found myself on the wrong track. My mother never gave up. And if I ever had the opportunity to talk to single moms with hard-headed boys, I will tell you that without question, the Word of the Lord works. And if you don’t quit, most often amazing things in a positive way will happen, unfortunately years down the road.”

At 18 years old, he rededicated his life to the Lord and dove into Scripture. His mother’s and grandmother’s prayers were heard. His mother raised him with a switch and the Word of God. They are two powerful tools for raising children. {I know it is so politically incorrect to speak about a switch today, but this has only been in the past 20 years. I was “switched” and everyone I knew growing up was "switched" and we all turned out pretty good!}

So, dear single mothers or mothers with unbelieving husbands, you can raise godly offspring. Ben Carson, another great African-American man, was raised by a godly, single mother and grew up to be a pediatric heart surgeon and is running for president! With God ALL things are possible! His grace is sufficient in our weakness.