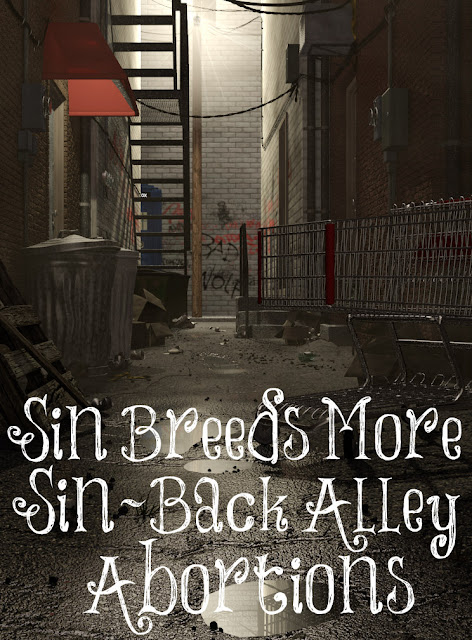 Before the 1960s, getting pregnant out of wedlock was considered shameful. If an unmarried woman got pregnant, many times she would have to go into hiding until she had the baby. Some women didn't want the disgrace of it all, so they went for back alley abortions. In the process. some of these women died due to the extreme bleeding or from the infection they would get from the abortion.

Then came the promiscuous 1960s and the sexual revolution where women wanted the freedom to leave their homes and have careers. They also decided it was great to act like a man and be able to have sex outside of marriage, especially now that they had birth control pills to prevent pregnancy. Unfortunately for them, it didn't always work so they would seek out back alley abortions. In 1973, seven unelected judges on our Supreme Court decided that it was okay to murder babies in the womb in order to make it safer for women to have abortions.

Since this Law came into being, there have been over 58 million abortions in America. Fifty eight million children have lost their lives so that some women wouldn't lose theirs in back alley abortions. Now that women can have abortions for free, they are more free than ever to have sex whenever and with whomever they want. Sin breeds more sin. Instead of valuing life {the life of the mother}, we have devalued it {58 million children murdered}. Sexual immorality is rampant. Marriage is no longer important. Life has been cheapened and degraded.

Many women, feminists in particular, have short term vision. They felt badly for these women who went for back alley abortions and suffered harm. Their solution to this was to allow abortions. Short term gain, women have abortions safely. Long term pain, millions upon millions of babies are murdered in the womb and denied life. In order to save a few women, they have murdered many more women {baby girls grow up to be women, in case they didn't understand}. In past years, men were very much against abortion and voted this way, whereas women were for it in sympathy with women in this predicament and voted for abortions. Women leading and having their say is rarely a good idea.

How should we as Christians respond to this? Value life. Value marriage. Understand that children are a precious gift from the Lord. Love your children enough to be home full-time with them raising them to know the Lover of their soul. Teach them sexual purity until marriage. Model a godly, happy marriage to them. Give some time and/or money to your local pregnancy center that is trying to save babies. Vote for candidates who value life and don't vote to have babies murdered up until they are coming out of the womb, like Hillary and Bernie. Pray for our leaders and this land. Love mercy and walk justly. Don't be afraid to speak life and Truth to others.

This is a pro-abortion display put together by the campus atheist club last month at the University of North Georgia. This is what happens when you devalue life.