Who is More to Blame for the Destruction of Our Culture? 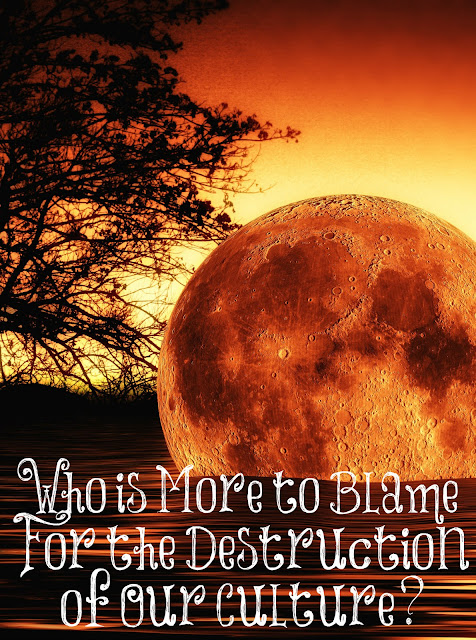 Are men or women the most to blame for the spiraling downward of our decaying culture? As I was pondering this question, this verse came to mind, "Every wise woman buildeth her house: but the foolish pluck it down with her own hands" {Proverbs 14:1}. I thought about the verses in Proverbs about how disobedient women are described as quarrelsome and nagging. A godly women may even win a disobedient husband with her godly behavior.

According to this article nearly 70% of divorces are initiated by women because "it's often the woman who expresses more overt conflict and dissatisfaction about the state of the marriage. On the other hand, the man is more likely to report feeling troubled by his wife's dissatisfaction, but pretty much 'OK' with the way things are; he's content to just lope along as time passes."

Why are women more quarrelsome and nagging? Why are they more dissatisfied with marriage than men? Expectations. Like you have probably heard, men marry women and want them to stay that way and women marry men wanting to fix them. Expectations destroy marriage. Women are more likely to break up marriages which is unfortunate since they are the ones who suffer more financially and physically; they must work outside of the home and aren't protected.

What else has caused the destruction of our culture? Feminism. Women were told to be dissatisfied at home so they left their homes for careers. Their homes stand empty all day. Children are being raised by others and not being disciplined properly so they are rebellious. Affairs happen now more in the workplace. Little boys aren't being raised by fathers. Wives are too exhausted to care for their husbands and they tear their homes down with their own hands.

What about the church? Why has it become so lukewarm and ineffective? Feminism and women leading. Preachers are afraid to speak about a woman's role in her home for fear they will lose half of their congregation. They would be run out of the church if they taught wives to love and obey their husbands and be keepers at home. Even older women who try to teach the younger women are sneered at. I know. Instead of teaching these things, women are teaching things they shouldn't be teaching and becoming leaders in the church. As for my people, children are their oppressors, and women rule over them. O my people, they which lead thee cause thee to err, and destroy the way of thy paths {Isaiah 3:12}.

Even Donald Trump gets the value of women in the home. He said these words in 1994, "I think that putting a wife to work is a very dangerous thing. If you're in business for yourself, I really think it's a bad idea. I think that was the single greatest cause of what happened to my marriage with Ivana," Trump said. He said that he disliked hearing her "shouting on the phone" during contentious business deals."A softness disappeared. There was a great softness to Ivana, and she still has that softness, but during this period of time she became an executive not a wife," Trump had said.

Then his comment about his second wife, Marla Maples working outside of the home, "I have days where I think it's great. And I have days where, if I come home -- and I don't want to sound too much like a chauvinist -- but when I come home and dinner's not ready, I go through the roof," he said.*

I am figuring if women can tear down their homes, they can tear down a nation. How should we respond to this? Go home. Raise your children in the nurture and the admonition of the Lord. Fix your family nutritious food. Love and obey your husband. Find out what pleases him and be happy and satisfied with him. Live within his income. Be content and joyful at home. Find a church that is solely run by men. Listen to male Bible preachers and teachers. In short, obey God's Word. Yes, we are a remnant but let's be a strong remnant for the Lord. He calls us to do this and He gives us the means to do this: His Word, His Holy Spirit, and the ability to come boldly to His throne. Live this way and you will reap blessings; for we reap what we sow.

*Source: This is not an endorsement of Trump in any way,
but I sure do agree with these words of his.