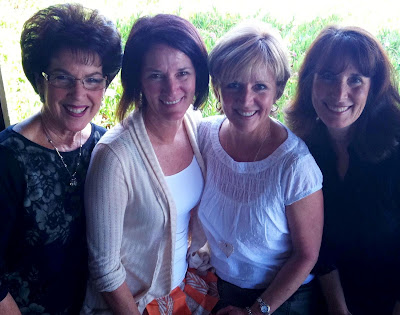 My good friend {and adopted sister :)}, Carol, brings Jesus' love wherever she goes.  She was telling us the other day at my sister's luncheon that she frequents this place where she knows a young man who is of the world and living a worldly life style.

Last time she went to this place, he asked her to tell him one of her stories.  She is a great story teller.  She tells stories of things that have happened in her life.

She told him of this young woman who has terminal cancer.  She lost family members and was in deep pain.  She was only given three months to live.  She asked Carol how to find peace in the midst of so much pain.

She told him of His love for people.  He paid the penalty for all their sins.  They can walk in newness of life now with no fear or condemnation.  All that was required of them was to accept Jesus' death on the cross as forgiveness for all the wrong choices in their life, and then desire to let Him be in charge of their life from now on.  She also shared the wonderful promise of heaven where there would be no more chemo, pain or sadness.

When she was done, he said, "Someday I am going to do that."  Carol couldn't believe it.  Well, yes she can.  She knows and has seen the power of the gospel over and over again.

I was getting my hair done recently.  My hairstylist is an amazing woman.  She is always kind and friendly.  She isn't a believer and has very liberal views.

It could easily turn into an argument and the last thing I want to do is argue about something that has no eternal significance.  Her seeing Jesus and coming to know Him should be the only thing I care about,  not whether she believes politically like I do.  I want to be like Carol.  I want to shine His light wherever I go.  That is all that matters.  Everything else in life is going to burn.

That if thou shalt confess with thy mouth the Lord Jesus,
and shalt believe in thine heart that God hath raised him from the dead,
thou shalt be saved.
Romans 10:9