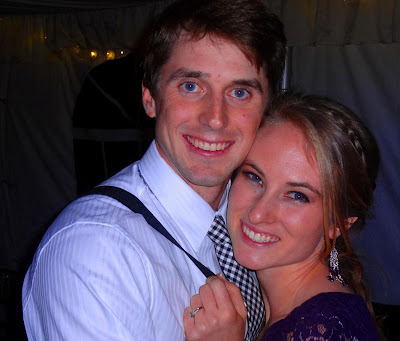 I don't think it is...We have proved that.  Marriage has been simple for us the past eight years.  We are called to become one flesh.  So the most important thing is to make sure you marry a strong believer with deep roots in Jesus.  Next, get some good marriage mentoring.  Learn how to do it right, right from the start.

Ryan and Erin and Jon and Alyssa did it right.  They prayed for their spouse.  They wanted God to choose their spouse for them.  They wanted a spouse with deep roots in Jesus and a strong biblical foundation.  They learned that wives weren't suppose to nag, complain, and try to manipulate their husbands.  They knew the husbands should be the leaders of the home and love their wives.

Ryan and Erin have been married over two years.  Erin got pregnant on their honeymoon.  She spent nine months not feeling that good.  Life with an infant isn't easy.  They moved several times.  Ryan is trying to get his business off the ground.  But they are very happy together. They enjoy each other.  They still are very much in love.

Jon and Alyssa have been married over a year.  They moved to a different city, had to find a new church and start a new job.  They had to make new friends.  They are still crazy about each other.

Neither of these couples fight or argue.  They live at peace with each other and try making the other one happy.  They are affectionate with one another and are happy to be together. {No, life is not perfect, but it is good, very good.}

Marriage should not be hard.  If you are married to a difficult man, I have a challenge for you.  For one month, try not arguing or nagging him at all.  Try being cheerful and warm towards him.  Try pleasing him and finding out what makes him happy.  Try not thinking one negative thought about him or saying one negative word to him.

Your marriage may not be great after a month, but I bet it will be a lot better!  Women have a lot of power in marriages.  I have seen it over and over again.  Some women get upset with me and tell me I blame the women.  No, men aren't perfect but I do believe women usually wield more power in a marriage.  Even the Bible agrees with me ~

Every wise woman builds her house:
but the foolish plucks it down with her hands.
Proverbs 14:1

How would you describe your marriage?  Simple or difficult???