Treasuring Your Home More Than Christ 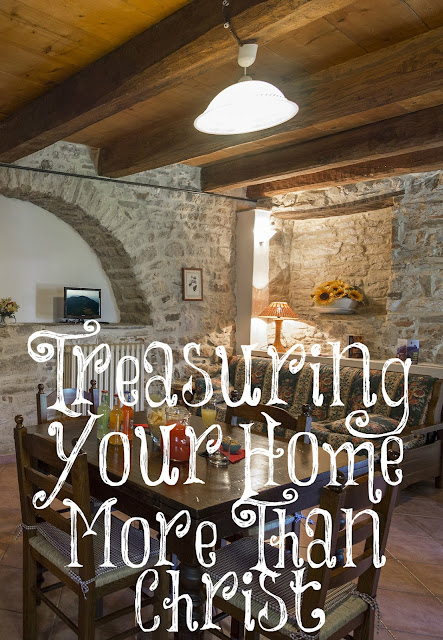 Do you treasure your home more than Christ? Are the things of this world more important to you than the things of Christ? When we had four small children, we moved from north of Los Angeles to the San Diego area. We bought a new home with the money we made from our small home in LA.

I met a woman in this neighborhood who had one child and decorated her home beautifully. She invested hours and hours and a lot of money into her home. She kept it perfectly clean. I wanted to have a home like hers so I went about creating my home as close to hers as possible.

It was during this time that Ken and I argued about money. I finally asked him to give me a budget and he did. However, instead of waiting patiently for the time I could buy something new, I would buy it on “credit” and have to wait a long time to be able to pay it off with the budget I had been given. I had fallen for the trap of having a gorgeously decorated home that cost a lot of money – the America dream.

During this time, Ken was gone from home traveling half of the year and my children needed my undivided attention but I was too busy painting, shopping for, and fixing up my home. Shortly after this, I got terribly sick and could no longer fix up my home like I wanted. About nine years later, we bought another bigger home that was bright and sunny.

A few years before this, my mother-in-law had given me a book called “Margins” by Richard Swenson. Right before we moved to our second new home, I decided to read this book and it convicted me of my mad dash to decorate my home perfectly. On the day we moved to my new home, I shared with my mother-in-law that I regretted encouraging Ken to buy this home and didn’t want to spend a ton of money on this home but wanted to live contently instead. She replied, “Live simply in this home” and I have.

This home is very comfortable but not extravagantly decorated. Most of the furniture is old from my childhood and some we bought on Craigslist. We have simple window shades and very little clutter. I learned to value the people in my home more than my home itself. I later learned about being a submissive wife and began practicing this.

I made the decision that I wanted to treasure what the Lord treasured and not what this culture treasured. His treasure would become my treasure. His treasures are those that live eternally – people. Don’t waste your time having the perfect home. Yes, keep it as clean and tidy as you can but remember that the people in your home are what make your house a home and not the home itself since it often changes and will one day be destroyed for good, along with all the other lifeless things on this planet.

But lay up for yourselves treasures in heaven, where neither moth nor rust doth corrupt, and where thieves do not break through nor steal.
Matthew 6:20