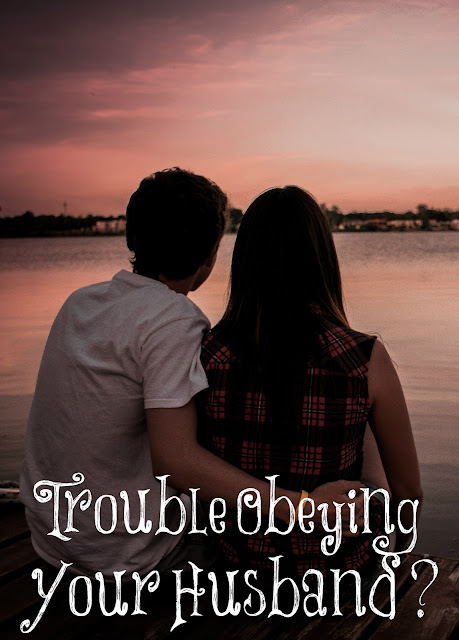 Many disdain the idea of obeying their husband. They may think it resembles a child-parent or a slave-master relationship instead of a marriage. Many have accused me that this teaching leads women to being abused! They much prefer “mutual submission” and not just having one leader in the home. Are we commanded to obey our husbands? Yes, absolutely. Even as Sara obeyed Abraham, calling him lord: whose daughters ye are, as long as ye do well, and are not afraid with any amazement (1 Peter 3:6). We are to obey our husbands just as Sara obeyed Abraham and she even called him “lord” showing him her respect and submission.

What if you have friends who despise the idea of obeying their husbands? What should you say to them to convince them that this is indeed how they are supposed to be with their husbands? I asked the chat room for their opinions and they gave me some great ideas!

Adrienne: “I would say to them ‘You are actually saying you can't stand God's Word.... ‘ And then tell them the Scriptures and admit that as sinners this can be difficult but we will be sanctified and grow...”

Amber: “I'm not sure what I would say, but what I see happening in so many marriages is the wife trying to treat her husband like a child and forcing him (usually through nagging) to obey her. Most of the men I know want peaceful lives and don't abuse their position of authority in the family. That's not the case for all men and women of course, but I think it's true for the majority of couples. Obeying my husband is pretty easy for me because he is calm, likes to make rational decisions based on facts and not feelings or emotions, and he never uses childish tactics to get his way. Plus biblical submission is a willing decision made by the wife. If the husband is forcing the wife to obey, that's not submission. I don't even really think about submission on a daily basis because it's just kind of a daily decision to be kind and loving and respectful to my husband as we should be to all people. I think about it more in important decisions.”

Dina:  “I would say that it is very fulfilling to me because it is just how God designed it to be.”

Brooke:  “I'd challenge them. Be obedient to your husband’s authority for thirty days. After thirty days, let's catch up and see where you stand. I would have never believed it either. I thought my husband would abuse his power. I felt I'd feel like a timid woman-child. I felt like he'd actually want someone else after a while (someone who didn't let him ‘walk all over her’). There is very little you can do to persuade someone....the outcomes provide the best example.”

Kayla:  “I'd say I didn't marry my husband to disrespect and disregard his thoughts and feelings for the rest of my life. I married him because I love and trust him to lead us and our family in any situation.”

Our obedience to our husbands is our God-ordained role. If you want to fight it, you are fighting the Lord. His will is always the best place for you to be so stop fighting and begin obeying Him. You will find rest for your souls living in the center of His perfect will for you.

Teach the younger women to be... obedient to their husbands.
Titus 2:4, 5