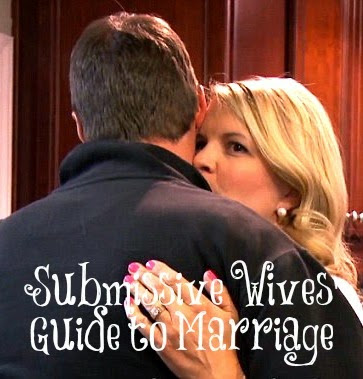 TLC was bold to show this program. Tara Furman learned to submit to her husband, then her marriage improved dramatically. My favorite part of this program was watching the young woman who Tara was teaching to submit. At the beginning, Mark and Kristen were in a troubled marriage. Kristen stayed in bed while Mark got the children off to school and drove  to work. She'd wake up resentful because the house was a mess. This was one unhappy couple on their way to divorce.

Tara mentors Kristen about being a submissive wife. Kristen decides she is going to give submission a try. She wakes up early, gets dressed, fixes her family breakfast and sends her husband off to work with a snack and a big hug. He's excited! She begins doing the laundry, catching up on her housework and fixing nice meals for her family. He brings home flowers to her. If Kristen continues on the submissive path, their marriage will not end in divorce!

Kristen is much happier with herself now that she is disciplined, kind and loving. A life of selfishness and living for ourselves produces pain and misery for everyone. Doing what we want, being lazy and selfish are NOT freedom as so many believe. This is being slaves to sin. Self-control is freedom, not bondage! God calls us to give ourselves away, serve others, be disciplined, have self-control and be kind; be servants of righteousness through the grace Jesus abundantly provides for us.

However, we should not be surprised at the firestorm against it. Satan is the prince of the power of the air and has blinded those who continually turn away from God and His ways "because that which may be known of God is manifest in them; for Gad has showed it unto them...when they knew God, they glorified him not as God, neither were thankful; but became vain in their imaginations, and their foolish heart was darkened. Professing themselves to be wise, they became fools" {Romans 1:19, 21, 22}.

As believers, we are responsible for being salt and light and spreading seeds of Truth wherever we have the opportunity to spread them. We are not responsible for what type of soil our seeds are falling upon, only that we sow the seeds. Who knows? There were probably some women who watched this program and thought they just may give submission a try since they have nothing to lose and everything to gain! Many marriages have been saved when the wife stops expecting their husbands to make them happy and instead decides to do everything they can to make their husbands happy.

Kristin Haywood from the show has commented on this post and said the following: This is so encouraging friends! I hope you will take the time to add your feedback on the TLC Facebook page. I've been really torn down because of the show but I can't be upset because it's really turned our marriage around. In my defense, I have 3 chronic illnesses that have made things difficult and I did a lot more around the house than was shown. And, I hardly ever have taken a nap. But I get the point we were trying to get across. I pray that I get to continue on the show to encourage but also to show our progress. I would like the other pieces of this lifestyle to be shown & I would love to be a part of that. Do you all think I should start a public Facebook page? Feel free to find me on Instagram. My profile there is not private. I would love to continue to be supported and learn from you all. Btw you can find the show on Amazon, Apple TV,  and I have heard on Hulu and a few places on YouTube. Thank you again for the wonderful blog.