Does Having Authority Usually Corrupt? 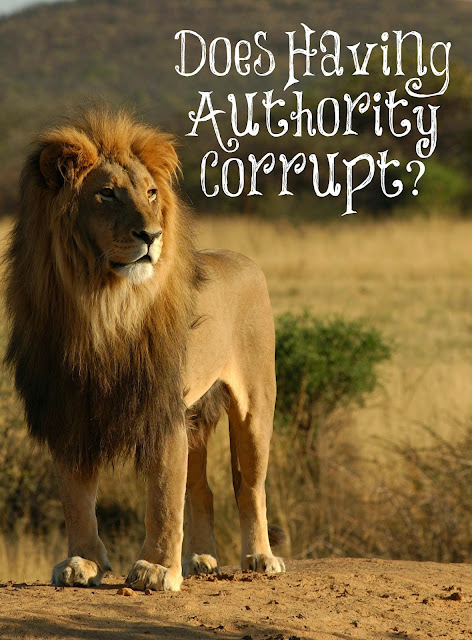 Does putting one in authority corrupt the one in authority? Another author from another Christian blog did a post about submission and believes having authority usually corrupts. This is why God's standards of biblical submission given to wives must be wrong for today.  Some of the comments from this post were very interesting to say the least. I thought I would share a few so you can know some of the arguments against submission and how they manipulate Scripture in order to come to their conclusions. These comments were directed at me in response to comments I made supporting biblical submission ~

I think why you have such a problem with certain readers questioning if your postings are biblical is because they know that they are fighting against the tides. They cling to their view of the bible and want women to stay home and be kept under their husband’s authority. They keep pushing their agenda, because they know society is turning against submission.

Women are now holding positions over men. They are doctors, lawyers, and policy makers. I don’t have anything against submission, BUT it is a woman’s decision. A small circle of women may choose submission, but the majority will not. I don’t think they are personally against you, but they are certainly against women not having choices. Maybe you should limit the number of responses from the readers who are distracting your message? Just a thought.

In Ephesians 6:5-9, detailed instructions are given on how to treat our slaves. Well, by that logic would that mean that it is Biblical to have slaves? Wait, not only Okay Biblically but must be seen as a command; "Let’s all go out and get some slaves, right after all the women blindly submit to their husbands." Hmmm… sometimes it’s tough when we read more than just the convenient verses. Sadly, such verses probably were used to keep people enslaved not too long ago in our human history. And now are keeping some women “enslaved” by enforcing a cruel submission.

Whether or not we obey God is our choice as believers? God tells us that if we love Him, we will keep His commands {John 14:15}. God clearly teaches wives to be submissive to their husbands. Are women being submissive to their husbands equated with having slaves? No, in fact, Paul does say this to slaves in 1 Corinthians 7:21, "Were you called while a slave? Do not worry about it; but if you are able also to become free, rather do that." The Bible NEVER endorses slavery. Is wifely submission defined as being enslaved by cruel submission? On the contrary, wifely submission may win a disobedient husband to the Lord! These comments made to me are a perversion of Scripture in an attempt to water down submission.

God’s Word never changes. It is the same yesterday, today, and forever. Submission is as relevant and as powerful as it ever has been. It produces peace and order in marriages, in families when children submit to their parents and in societies where citizens submit to the laws of their land.

Know your Bible so you aren’t tossed around by every wave of doctrine which is contrary to God’s Word. The only way you will know counterfeits is by knowing the Truth. Study God’s Word daily. Measure everything you hear by it, including my words. Be wise as serpents and innocent as doves when it comes to evil. Stand firm in the wisdom and knowledge of God.

As a result, we are no longer to be children,
tossed here and there by waves
and carried about by every wind of doctrine,
by the trickery of men, by craftiness in deceitful scheming.
Ephesians 4:14