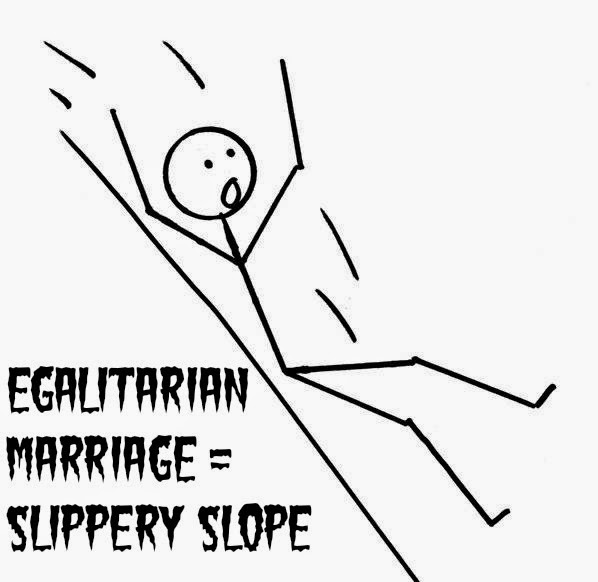 Where biblical patterns are not followed, husbands and wives have no clear guidance on how to act within their marriages, and there is increasing stress that brings harmful and even destructive consequences to families. {Wayne Grudem}

Those who believe in egalitarian marriages "submit to one another" are on a slippery slope to watering down the Word of God where each generation gets farther and farther away from the Scripture as it is written. "There is a sifting, a sorting, a dividing going on within the evangelical world, and I believe that institutions that adopt an egalitarian position on this issue will drift further and further from faithfulness to the Bible on other issues as well."

If you believe that there are no differences in our roles as husband and wife, many things will steadily go downhill from there. If the man is not the protector and provider of the family as God ordained, women abdicate their roles as keeper of the home to work full-time outside of their home. If a woman is not the nurturer and nester of the home and children, children are left all day in the care of strangers and the home is neglected, marriages fall apart and stress rules the day.

If you believe that there are no differences in the roles of husband and wife, there will most likely be a lot of conflict, arguing and quarrelling which God definitely forbids in Scripture. If there is not one leader in ANY organization, chaos is likely to reign. Every institution needs a leader to run smoothly or else it will fail.

So how does a biblical marriage work. Here are the words of Wayne Grudem again because I think he says it perfectly ~

But in every decision, whether large or small, and whether we have reached agreement or not, the responsibility to make the decision still rests with me. I don't agree with those who say male headship only makes a difference once every ten years or so when a husband and wife can't reach an agreement. I think that male headship makes a difference in every decision that the couple makes every day of their married life. If there is genuine male headship, there is a quiet, subtle acknowledgment that the focus of the decision making process is the husband, not the wife. And even though there will often be much discussion and though there should be much mutual respect of each other, yet ultimately the responsibility to make the decision rests with the husband. And so in my marriage, the responsibility to make the decision, rests with me...This is something that is God-given. It is very good. It brings peace and joy to our marriage, and both Margaret and I are very thankful for it.