Is It a Sin to Tithe? 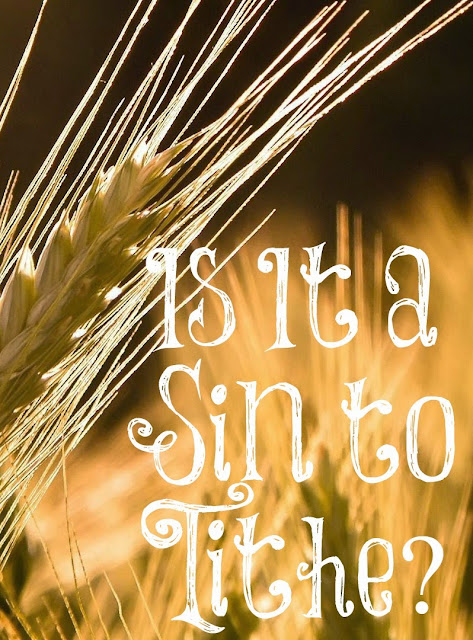 Michael Pearl believes it is a sin to tithe. Paul is teaching about the grace they have to give money in 2 Corinthians 7 and encourages them to “abound in this grace, I speak not by commandment, but by occasion of the forwardness of others, and to prove the sincerity of your love.” He didn’t encourage the church in Macedonia to give an offering. They were proactive and gave of themselves even though they were in poverty. All willing Christians should have a willingness to give. God doesn’t require you to give what you don’t have, just what you have and are willing to give. Paul continues to teach about giving to help others in TWO chapters. The following words are the words of Michael Pearl.

If tithing was a Christian doctrine, these two chapters would be a place for him to have mentioned it. He’s talking about giving. He goes into great detail and he never once says it’s your duty, as a Christian, to give 10% of your money. This would have been the perfect place for it. What he wanted was a good offering to feed the church in Jerusalem and he NEVER said a word about tithing. It’s a sin to tithe! {Michael chuckled and said, “I like saying things like that!”} Why is it a sin to tithe? Because you're putting yourself under the Law and taking yourself out from under the Spirit. You’re not allowing God to tell you to give 20%. You’re not allowing God to tell you to give 90%. You’re under legalism giving 10% and saying, “I’m done!” I’ll tell you another way it is sin. Some of you can’t afford to give 10%. You have a family going hungry and you shouldn’t give 10%. I don’t know how much you should give, but you can’t give 10%. When you’re only getting $110 a week and you have 18 kids, you don’t need to be giving $11 to the church. You need to be keeping every cent you got right there in your home. He said, “I want there to be equality.” That’s  what he said. In other words, these giving too much and these having too much. He wants everyone to give so everyone has sufficient amount. That’s his rule of giving. Give as you’re able. Have a willing heart and give as you’re able.

Then he spoke about the Amish and how they are better at this than we are. If someone loses a home, they build them a home. If they need a horse, someone gives them a horse. If they need food, they give them food. If someone needs medical care, they all pitch in. Those working will have more than those who don’t but no one is starving. There is much more equality among the Amish. They give to those in need so there’s no suffering. It’s not about tithing; it’s about giving from the heart. "But this I say, He which sows sparingly shall reap also sparingly; and he which sows bountifully shall reap also bountifully. Every man according as he purposed in his heart, so let him give; not grudgingly, or of necessity: for God loves a cheerful give" {2 Corinthians 9:6, 7}.

If Christians were generous with their money and shared with other believers, we wouldn't need medical insurance, government assistance or welfare. The Amish are exempt from social security taxes because they have proven that they never rely on government assistance for social security or welfare. They pay for the elderly and dependent members.  If one of them has to go to the hospital, they all pitch in to pay the bill. Older widows aren't suppose to have to go out and get work outside of their home. Family and the church are to support them. Younger widows are to remarry. God wants the church to take good care of its own. Government is extremely wasteful and inefficient at doing a good job in this area, plus the more powerful they get, the more dangerous.

"Those who hold the position of tithing for the church are confused of its purpose and history. No Christian should be coerced into giving a set amount to receive God’s blessings. The simple reason is that it removes them from walking in grace and puts them under the law. The Pharisees tithed and watched what people gave, and they continued to tithe as the church was birthed. The church did not tithe." {The Origin of Tithing}

Yes, this is radical teaching and you aren't going to hear it taught in many churches today but I challenge you to find one verse in the New Covenant {those books written to the Church; Romans to Revelation} that teaches tithing.