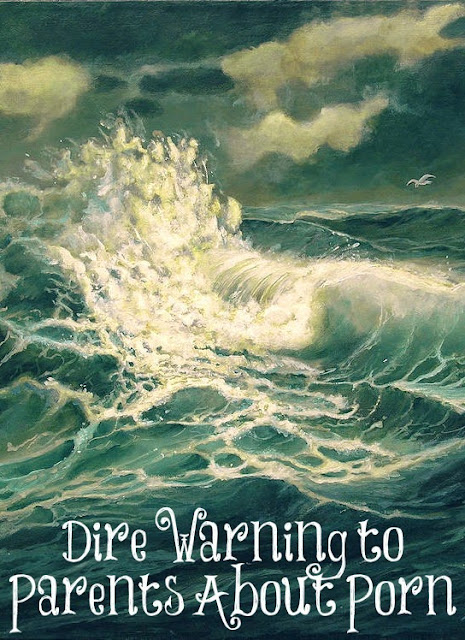 Michael Pearl gives it to you straight. This is why I enjoy listening to him more than any other preacher. He NEVER waters down his teaching in any way. Yesterday, I decided to listen to his teachings on 2 Corinthians since I am teaching this in the chat room. He began Chapter 7 with this dire warning to parents ~

I predict within ten years your young people won’t be able to find spouses, especially the girls. We often get letters like this one this past week: a girl had been married two years and was married through a betrothal {something that Michael doesn't endorse}. You know, one of those beautiful kind where the parents all get involved, the church is all involved and two people who are wonderfully protected, guarded and homeschooled come together in marriage and after two years of being married, she comes home and he’s wearing her clothes. He’d been wearing her lingerie but finally he dressed out completely.

That’s getting to be normal. People who start looking at pornography; young boys will be wearing girls clothes and molesting children before it is over with. It’s happening in epidemic proportions.

There are some other Christian groups on YouTube and talking about the epidemic that is around them about what they’re seeing. They’re talking that the first generation of homeschoolers who did great but now that they are training their own, they aren’t doing so well. They say the first reason is that the children that were homeschooled and home-churched and brought along never got born again; never got saved. They were really raised well and very religious but they never got born again; never got the Spirit of God.

Young boys, they get up and sneak around on the computer and look at pornography. They watch TV. The TV is enough pornography for a thirteen year old boy; commercials and all that stuff. They watch TV and they get all worked up good. A lot of them don’t like girls; they like their self too much. They just enjoy themselves.

I go to prisons where a lot of those people are and some of them are locked up for 20 years. They should have been shot or hung or their heads cut off because they messed with kids, with children. I’m glad they are there so I can witness to some of them. Some of them get saved but if they only had three months to live and they had a chance to get saved, they’d get saved. You tell them that they are going to be killed and it’s going to be in three months; they’ll have plenty of time to hear the Gospel. There’d be plenty of preachers in there giving it to them.

Some of you kids right now who are sneaking around looking at pornography, don’t expect to marry any of the decent girls here. Nobody’s going to want you because you aren’t going to be a decent husband or father. You’re just going to be trash. If that’s where you are now, know where you are headed. I just had to say this. {He is calling "trash" those who end up molesting children which is happening FAR too often today and destroying many children's lives. It were better for him that a millstone were hanged about his neck, and he cast into the sea, than that he should offend one of these little ones. Luke 17:2}

Therefore, parents, there MUST be a balance between sharing the Gospel often with your children, living it out in front of them, loving them deeply, being joyful and setting boundaries in contrast to not being involved enough in protecting them, not walking the talk, setting boundaries without relationship and love and not verbally teaching them God's Word. Don't let what Michael Pearl said happen to your children. It doesn't have to but it is your job as parents to diligently teach, love, and model to your children God's ways with His grace giving you the strength to do so.

Therefore, having these promises, beloved, let us cleanse ourselves from all defilement of flesh and spirit, perfecting holiness in the fear of God.
2 Corinthians 7:1

What are "these promises?" "I will dwell in them, and walk in them; and I will be their God, and they shall be my people" and "I will receive you, and will be a Father unto you, and ye shall be my sons and daughters" {2 Corinthians 6:16-18}.